Bachelor Nick Week 9 – The Night Starts Off Cold, and It Just Gets Colder

One hour seems about right, doesn’t it? I know I’m supposed to say that I can’t get enough of this show and I wish it was on 24/7, but that second hour has turned into a bit of a marathon over the past couple weeks. Now, Bachelor in Paradise – that I could watch nonstop. Hmmm, Paradise Channel – All Jorge, All Day. Again, I digress…

Last week, on The Bachelor: Nick rolls in a swamp with Raven, goes mega-church dancing with Rachel, plays dress-up for Corinne, and gets raked over the coals by Vanessa’s dad. I think he wishes he could’ve done Corinne’s date twice. And oh yeah, Andi shows up because she’s got nothing going on, and Nick has one final fence to mend before his apology tour is complete. Nick must really, really want to find a woman to go through this. And you, Andi? Will it be whiskey or wine tonight?

Yeah, they’re not paying me that much to be here; better make it whiskey. A double. No, a triple. Fuck it, just bring the bottle over…

Andi: So, are you going have sex in the Fantasy Suite?

Nick: I don’t know. It’s, ummm, caused problems in the past, if you know what I mean.

Andi: I know what you mean. And you should totally have sex, I think you need to sample the goods before you choose. I’m glad I did. I almost picked you, and that night in the Fantasy Suite was one of the most awkward experiences of my life! Thank god I dodged that bullet. I mean, Josh was kind of a dick and all, but he was a world champion in the sack! That guy could go and go and go….

Nick: Ok, I get your point. Anyway, I think I finally have some sympathy for what you went through, now that I know what it’s like to be on this side of things.

Andi: Not happening, Nick. No how, no way, not in a million years.

Andi: No, Nick, Kaitlyn is not coming to see you tonight. Jesus, will you just turn the page and pick one of the girls you have left? You’d be insanely lucky to end up with any of them, including that insecure daddy’s girl. Did she really buy you 3 grand worth of clothes last week? Just pick her.

Andi: Whatever. I’m gonna take that bottle to go.

While all this is happening, our four finalists gather on the world’s coldest rooftop. Eventually, Nick arrives and apologizes for making them wait in a freezing New York winter while he got lit with Andi in his nice warm hotel room. “Just so everyone knows, she wouldn’t take me back, so I’m more committed than ever to this journey with you ladies. Well, three of you, at least.”

Rachel – We still know she’s the Bachelorette, so, whatever ABC.

Vanessa – even though her entire family hates Nick, which means – wow:

Corinne: I’m so sorry for whatever I did wrong!

Nick: You didn’t do anything wrong.

Corinne: I just love you so MUUHUHUHUCH..WAAHH!

Nick: I know…I’m keeping the clothes, by the way.

I didn’t see that coming. Corinne has her post break-up empowerment moment, where she’s done trying to impress men and she’ll never kiss up to another man, never-ever-ever again. Until Bachelor in Paradise rolls around, and then it’s time to break out the Super Sex Charm! That shit is PLATINUM! See you in a few months Corinne!

Off to Warm and Balmy Finland

Man, it looks cold here. And 3 hours of daylight? Are you kidding me? The scenery is gorgeous, I’ll admit, but I’m more of a tropical kind of guy. Sun, warm water, not a lot of clothing – that’s the kind of vacation where babies get made. Nick takes a casual stroll across the frozen tundra:

Alright, I haven’t seen a building in like 3 hours and I can’t feel my toes.  Where am I? Can’t we just go to the Caribbean?

In fact, the only person that looks completely comfortable is Vanessa, because this is like a Canadian summer. Unfortunately, Vanessa will have to wait for her nice afternoon picnic on a barely lit patch of ice, because Raven gets the first call.

Raven – Let’s Play Darts and What Did You Say Again?!

Nick and Raven drink and play darts with some drunk locals, and then get to know each other over some (more) alcohol. Raven is EXcited for the Fantasy Suite with a capital (s)EX, but she does have some concerns, because she’s only had sex with one person and he never gave her an orgasm. Cue the needle scratching across the record now: 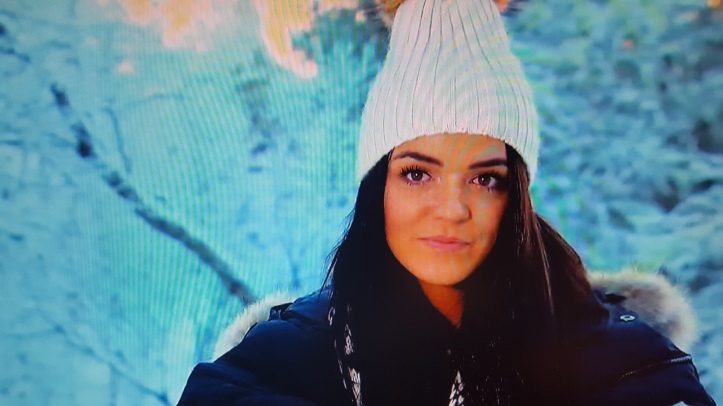 Just what Nick needs to hear after being reminded earlier that he was so bad in bed, Andi chose a verbally abusive ex-baseball player over him, and still doesn’t really regret the choice. Anywho, off to a remote cabin in the woods to (hopefully) light Raven’s candle. Raven was such a skeptic at first – they all say this – but she feels more strongly for Nick than any one else she’s ever met, and she’s in love and wants to forego her individual room for the Fantasy Suite. Nick is getting super-excited about closing the deal when Raven drops the two biggest bombs since Fat Man and Little Boy: 1) Only been with one guy, 2) Never had an orgasm. 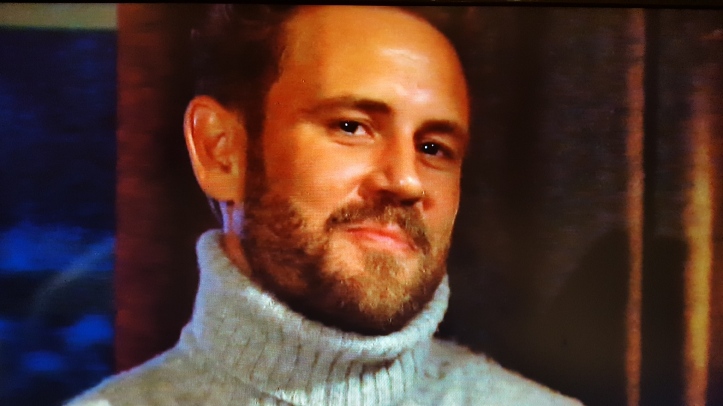 Annnnd it just went back down. Can I have one normal Fantasy Suite night, please? Just one?

That is the King of All Turtlenecks, by the way. A Turtlenick. And does he oil his beard? It’s glistening tonight. So, Nick and Raven run off to their private room to live out their wildest fantasies, so long as their wildest fantasies consist of lying on the bed, with their clothes on, looking at the Northern Lights. Finland’s straight-up kinky, yo.

And that’s it. Next week: another one hour episode (will Vanessa hold on to her core values? Will Rachel open up…about being the Bachelorette? Will Raven have a happy ending?), followed by two hours of Women Tell All! Corinne, Taylor! Taylor, Corinne! Much arguing and gnashing of teeth….seen ya then, my friends….

And now, Nick reenacts Rocky 4, and he actually does a pretty good job.