It’s time for the Men to Tell All, because guys love to talk and gossip and share their feelings…yeah, this is going to be a pretty slow night. I might not get my usual 2000+ words out of this one. Let’s break it up into sections.

Because these two have to get in the mix somehow. Look up “tenacious” in the dictionary and there’s a picture of JP and Ashley clutching their 15 minutes of fame in a vice-like grip. In 30 years, they’re going to be sharing pictures of their grandchildren on ‘Bachelorette Season 82 – Love in Outer Space’.

JP shows up dressed like Don Johnson from Miami Vice. He’s looking extra-squinty tonight, because he’s excited to be a dad! And, holy cow, is Ashley in the middle of a Jessica Simpson-style pregnancy. Quote from my Lovely Better Half: “She’s only 7 months?! She’s gonna be huge.”

A: I can’t see my feet because my belly is so big.

JP: I can’t see anything because my eyes are always closed.

They do a live ultrasound to find out the sex. Ashley makes a joke about filming the birth, but after this episode, I honestly wouldn’t put it past them. The Chris Harrison baby was pretty funny. The audience is on the edge of their seat:

Except for that guy, who clearly lost a bet with his girlfriend (says the man writing an entire blog about the show. I’m such a hypocrite sometimes). It’s a boy, the audience goes wild. See you kids in 2 months for the live birth.

We get another suave commercial during the break. Here’s Desiree and Catherine flashing their rings while Andi gives her super-excited-open-mouth face. 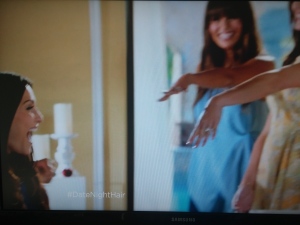 Wow. At least we know for sure that someone proposes next week, because if those girls did that to Andi after she got dumped, at least one of those bitches is getting smacked 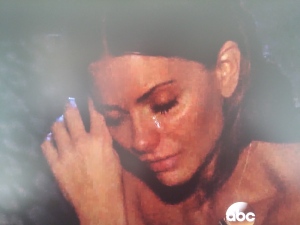 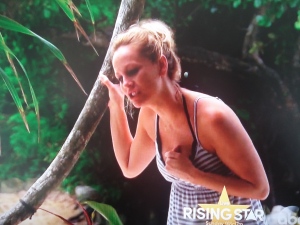 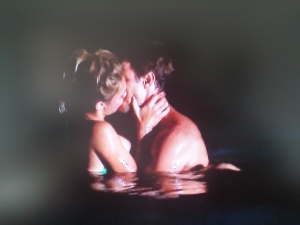 Plus Chris from Emily Maynard’s season, getting another shot at reality fame! I guess he really did wait offshore in a rowboat until they let him in. Next up for him: waiting outside JP and Ashley’s hospital room to try to get in on the birth. It looks awesome, by the way. I’m a little bummed that I’m out of town for the premier – thank god for the magic of DVR.

They reintroduce the rejects of the season, and everyone is wearing a scarf. It’s nice to see the producers have a self-deprecating sense of humor. Farmer Chris gets, by far, the biggest cheer from the crowd; girls love this guy and he didn’t get a ticket to paradise. Any possibility I’m wrong about Josh being the next Bachelor? Besides Nick the golfer talking way too much for a guy that was gone in week 2 and Drunk Craig not talking enough for a guy I have a man-crush on, there’s not much in the way of new info here. Pretty much the entire segment is spent talking about the Marquel-Skeevy Andrew ‘black guy’ comment. Andrew starts off by mixing up Ron and Marquel – because, you know, they all look pretty much the same – and it goes downhill from there. They replay the rose ceremony video for everyone. To review: 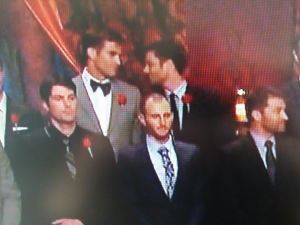 When pressed, Skeevy Andrew claims he said “It’s been a long night, when is this going to be over.” Uh-huh. He’s had 10 weeks since the first episode aired to come up with an explanation, and that’s the best he can do? Good luck with that social marketing job.

The big surprise to me is the blowback against Pantsapreneur. Farmer Chris hates this guy, and everyone piles on him for being a shifty weasel and talking behind people’s backs. Andrew apologizes to Marquel, and the issue is put to rest. They spent a lot of time on this, but the show has been dealing with issues of racism for years, and when accusations like that come out, they have to handle it. Whatever. Marquel is successfully riding the Bachelor train and we’ll never hear from Skeevy Andrew again, so there is justice in the universe.

Marquel – First off, JJ hijacks Marquel’s one-on-one time to defend himself from the last segment and again it completely blows up in his face. I had no idea about the animosity the rest of the guys had towards him. Is it just me? Did anybody else notice this? Chris, Marcus, Brian, Dylan – there’s a substantial number of guys in the house that simply do not like JJ. He gets really flustered and suddenly he’s back in high school again:

Poor JJ. So awkward…Back to Marquel. First off, a cookie pin: 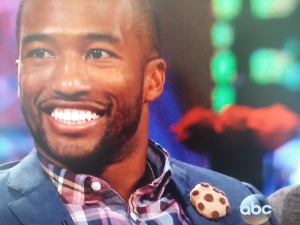 And why not? Who doesn’t like cookies? He was stuck in the friend zone, he didn’t realize everyone was making out with Andi already, he should have made a move, but he loves himself some Bachelor in Paradise! Black and white cookies for everyone!

Marcus – Not to burst everyone’s bubble here, but Marcus is only 25 and he’s already getting a bald spot. Enjoy him while you can, ladies – he’s not going to age well. We see the very best hushed whispers of the season, and he manages to look sad during the replay, despite the fact he’s spent the last 12 weeks half naked and hooking up in Tulum. He says he matured a lot; then he went to Whore Island and slept with everything that moved. He thinks he might have made out with Marquel at one point.

Farmer Chris – Chris Harrison starts off with “America has fallen in love with Chris.” Uh-oh. That’s what he always says about the next Bachelor. It’s looking more and more like my Josh pick is in jeopardy. There’s much hand-wringing and tears from the audience after the breakup scene: 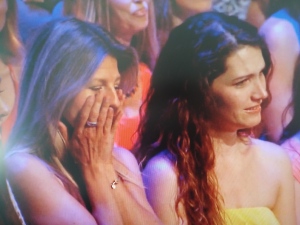 I think they’re writing to the Club de Giulietta after the show. Farmer Chris gets halfway through his sales pitch to be the next Bachelor when a stalker raises her hand in the audience and asks to meet him. 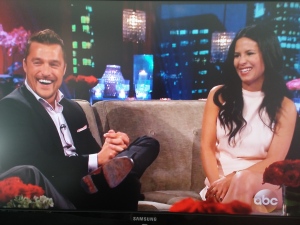 Apparently this girl flew from Toronto completely solo just to get on the show and meet Farmer Chris. They have a mini-date during the commercial break and Chris gets her number. Hey, good for her. She’s cute, he seems excited. They have as much a shot as any of the other couples that meet on this show. Knock yourselves out.

Andi shows up (looking good, btw) and they have a question and answer session. Do these guys have to ask a question? Farmer Chris seems like the last guy to be insecure and need an explanation for what happened, but he asks for one anyway. This must be coached. She thanks him for being as kind when he left as when he got there, as opposed to…

Marcus – “Did it scare you that I was so open with you?” (sorry, I’m laughing too hysterically to type anything right now…whew – ok) Andi says she wasn’t scared by it per se; more like completely turned off by how overly-tender and dainty he was.

Nick the golfer says something about Andi having her guard up. Andi looks confused for a minute:

“Who are you again?” She leans over and asks Harrison who Nick is and when was he on the show.

Chris Harrison breaks out a copy of the lie detector test that Andi threw away. Brian, JJ and Farmer Chris told no lies. I guess JJ’s pants really would catch fire if he lied. As far as the others:

Marcus is a man-whore. He’s slept with way more than 20 women. WAY more.

Josh – the audience wants to know, most of the guys want to know, but Andi decides against it.

Bloopers! Flushing toilets, dancing in hotel rooms, scarves, shattered plates, bumbling cameramen, pickles and holy nasal spray – that was nasty. Plus, Chris Harrison breaks a champagne glass so cleanly that it separates into 2 distinct and whole pieces. Seriously, the man is cooler than Steve McQueen in the dead of winter.

Next week – the dramatic finale you won’t want to miss! Nick is stoic. Josh has his game face on. Three hours of tears and romance – can’t wait. To add to the drama, Chris Harrison hands a letter to Andi from one of the final two guys. It has to be from Nick, right? I don’t think Josh can write that much.