We return to the scene of the last rose ceremony, and everyone is reeling from the psychological trauma of Elise’s speech. There’s lots of shaking heads and confused expressions, and AshLee goes so far as to say that Elise is crazy, which might be the most frightening indictment on the show so far. As for Elise, she really wants to fall in love with Chris Bukowski. Or Chris Harrison, or the camera guy, or whoever, really. “Chris is a blessing in disguise. Through every storm, there is a rainbow, and I believe that he can be that rainbow at the end of my storm.” Elise is the girl that floods your Facebook feed with motivational posters, to the point that you want to de-friend her so you don’t have to see this crap anymore, but you’re too scared of the shit-storm that would come flying your way afterwards.

Anyway, Elise ends up getting a date card and of course she invites Chris. While she is excitedly preparing for her perfect night of romance, Chris completely destroys his knee walking in the sand. As entertaining as it is watching him bitch and moan relentlessly for the next hour and 45 minutes, it can’t compare to the delusional opposing viewpoints on Chris/Elise’s relationship, which makes a nice running theme throughout the episode.

Chris and Elise before their date:

Elise: Dylan is a closed chapter. Chris and I are in the same place. He’s a real man who’s ready for commitment. He knows what he wants and he’s willing to fight for it without looking back.

Chris: My knee really hurts, but this is a night date and she’s got a bangin’ body. I’d say she’s hot to super-hot, so…[he shrugs absentmindedly]

Marquel/Michelle Money/ Danielle/Jackie – There’s too many people for a love triangle – a Love Rectangle? We begin with everyone walking back from the rose ceremony, and Marquel is loving on Michelle Money. “You’re really pretty. You’re an amazingly beautiful woman. I can really see something special developing between the two of us. I think we would be really, really amazing – wait, who’s that?!” That would be Danielle from Juan Pablo’s season, and suddenly Michelle Money is yesterday’s news. Danielle has a date card, and in a textbook example of no good deed going unpunished, Michelle tells her to just pick someone, anyone, secretly adding to the camera “as long as it’s not Marquel.” Of course, we all know what happens. Maybe it was just dumb luck, or maybe it was the Jedi mind trick Marquel was shooting Danielle form across the room: 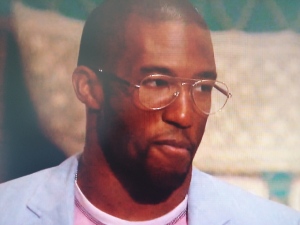 These are not the Bachelors you’re looking for…choose me, young one…

As for Michelle Money: 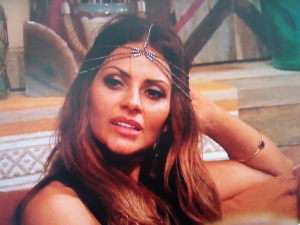 Marquel and Danielle fly to Campeche (which, incidentally, is Spanish for Romantic Escape From Whore Island). Danielle confesses that she has a crush on Marquel, and then they almost get struck by lightening. There’s nothing hot and heavy here. For what it’s worth, Danielle seems nice and normal and she’s really cute. Marquel would have to be a permanent playboy to simply drop her for the next-best-thing, which of course is exactly what he does. They fly back to rejoin the group and they’re hanging around a bonfire later that night, enjoying their post-date bliss, playfully flirting with each other. “For your initiation, Danielle, you need to walk over hot coals. I did it my first night, and now it’s – wait, who’s that?!” 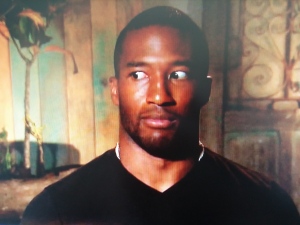 That is Jackie from Sean’s season, carrying a relationship-crushing date card in her hands. In an act of smug vengeance, Michelle Money tells Jackie that there will be no coaching, and she needs to simply pick a guy, any guy. Cut to Clare, who, much to Zack’s chagrin, decides to mark her territory like a rabid dog in heat: 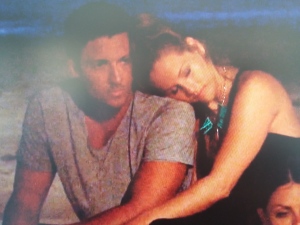 Hey, babe – why don’t we lay low on the PDA until the new girl picks someone, ok?

Marquel does everything but run to the other side of the island to distance himself from Danielle, and of course Jackie chooses him, because “he looked like the only one who was single.” He accepts, and it’s off to Campeche for the second time in two days to walk around some ruins. Personally, I don’t get everyone’s fascination with this girl.  Acknowledging that beauty is in the eye and all that jazz, she seems a little average to me. Not unattractive, just not the smoking beauty everyone talks about, and certainly not as cute as Danielle. But, it’s not my date, and Marquel seems to dig her a lot, even breaking his no-kissing-on-the-first-date rule. And suddenly Danielle is about to break the record for shortest stay in Paradise.

Chris and Elise at Dinner:

Elise: He’s the perfect prince charming for my first 1-on-1 date!

Chris: My knee is in agony, but she’s super-hot and I want to get it in.

Marcus/Lacy – I don’t think these two could be more boring if they tried. Lacy gets starry-eyed and she gushes a lot; Marcus rehashes some old speeches from the Andi Dorfman Files. Whisper, whisper, whisper; nothing new here. At one point, Marcus does let us know that he hates Chris Bukowski. Maybe the little Girl Scout will look through Chris’s luggage while he’s gone on his date.

Chris and Elise receive their room keys for the night:

Elise: I’m looking for someone who will be my rock and Chris really stepped up to the plate.

Chris: Dinner was great and all, but I’m ready to get down-and-dirty. [wink then a grimace] Ouch…oh man…my knee…

Graham/AshLee – Graham, like any normal person, is scared shitless of AshLee. “She’s a nice girl and all, but she’s picking out drapes and talking about meeting the parent’s, and we haven’t even gone out on a date yet.” Cut to AshLee, who’s talking about making babies and describing love as “believing in things you can’t see.” Yeah, like your nonexistent relationship with Graham. There’s no denying that AshLee is easy on the eyes, but that girl is straight-out, disconnected-from-reality crazy. She’s single for a reason, and Graham needs to stop walking and start running away as fast as he can. The two of them finally get their own flight to Campeche, where AshLee tells Graham she fell in love with him because of his Instagram account: 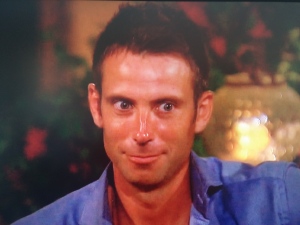 They get their room keys and Graham is pushing for sleeping in separate rooms while AshLee wants to be a “free spirit” about it. She does a pole dance in a nearby square in an effort to change his mind and it almost works; Graham is suddenly talking a lot about gray areas around the definition of their first date. In the end, though, he sticks to his guns – mostly because he doesn’t want to wake up tied to the bedpost, with AshLee dangling a knife over the more important parts of his bathing suit area.

Chris and Elise, the morning after:

Elise: Last night was sooooo magical! I feel like I’m on cloud 9!

Chris: My knee is really in pain. I can’t even walk. It’s throbbing.

Off to the hospital, where Chris is diagnosed with a sprained MCL and ACL, and a partially torn meniscus. Ouch. They go back to Whore Island where Elise brings food and ice, and generally tends to Chris’s every whim. Elise says she loves taking care of him, and it’s nice to see what their relationship is like in a real-life setting. 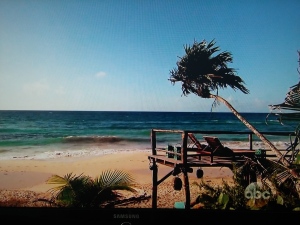 Michelle Money/Sarah/Robert – Michelle, still in shock from getting dropped like a hot potato by Marquel, decides she really wanted Robert the whole time. Or she just needs to get a rose from someone so she can avoid reality for one more week, I forget which. She and Clare hatch a plan to throw a double-date for Zack and Robert, and Michelle decides to let Sarah know beforehand. You know, to be polite; not to intimidate her into backing off of Robert. She’d never do that. Poor Sarah kind of falls apart after this. She talks about Michelle being beautiful and put-together and confident in all the ways she’s not; and then she says that Robert would never fall for a girl like her because he’s too attractive. Ugh. First off, Michelle is a 33 year old single mom, she calls herself “Money” and she left her kid behind to look for a husband on a reality show; you might want to pause for a few beats before you put her on a pedestal as the ideal modern woman. Second, I have all the sympathy in the world for Sarah being born with one arm, and it’s heartbreaking to watch her melt down during the interview, but the simple fact is she’ll never meet a really great guy until she stops convincing herself that she’s not good enough for a really great guy. Anyway, Michelle hangs out with Robert and tries to convince him that she really wanted him from the beginning. Robert, being slightly smarter than your average doorknob, doesn’t look like he’s buying it. 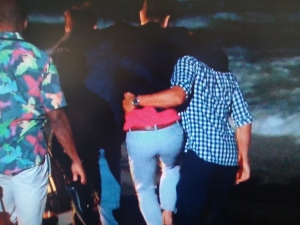 Seriously, Chris? I know your knee hurts (you’ve been talking about it the entire episode), but suck it up, man. You look ridiculous.

Sarah and Michelle Money are still fighting over Robert, but he says he doesn’t really want to talk about roses, he just wants to get to know each of them, so Sarah makes light conversation. Michelle Money, being insane and desperate, tells him she does want to talk about the rose and gives Robert an ultimatum, demanding that he make a decision, which, judging by his expression, he does: 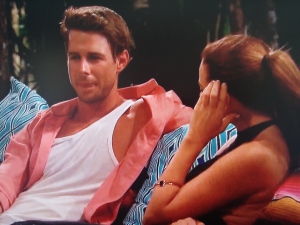 Danielle makes a final push for Marquel and he says “Good talk!”, which isn’t really how you end a serious conversation. When all the schmoozing is done, here’s how it plays out:

Graham picks AshLee – for fear of his life

Marcus picks Lacy – because she’s opposite from Andi in every way. Plus she has the hearing of a wolf, and can actually understand what he’s saying.

Marquel picks Jackie – this might actually last until next week

Chris chooses Elise, but doesn’t give her the rose (gasp!) because he needs to leave Whore Island because of his knee and he wants Elise to come home with him (awwww!). Elise rambles about lights at the end of tunnels, rainbows after storms, silver linings, etc, and cue the cheesy 80’s montage of Chris and Elise’s relationship. In a legitimately thoughtful gesture, however, Chris gives his rose to Michelle Money, telling her that, more than anyone else, she deserves a shot at finding love.

That’s it for this week folks. Next week, a shocking 2 day Bachelor in Paradise Extravaganza! The raccoon is back and so is CrazyEyesClare, and it looks like she’s facing off against AshLee in a Godilla-vs-Mothra-level death match for world supremacy. Can’t wait! 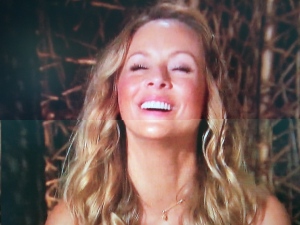