This is always the most boring week of the season, and despite some potential with the Return of Ian and the Clint/JJ weirdness, this week was no different. But, before we get started, how about that Ashley Madison hack? The thing that really blew me away is that they have 37 million members. I would have guessed maybe a couple hundred thousand, but 37 MILLION?! That’s a whole lot of people looking for a side piece, and a lot of unhappy marriages on the horizon. It’s a great time to be a divorce attorney; seriously, people are going to retire off this. And while I could care less about 99.99% of the people on that site, there is one small demographic that does intrigue me: the 59,000 registered members currently residing in Washington DC. How much would you LOVE to see some big-time political names come out, and during an election year no less? I really hope this story doesn’t fade away, because it has the potential to be freaking AWESOME. Makes me want to pop some popcorn and wait for the fireworks to start. Back to the show: 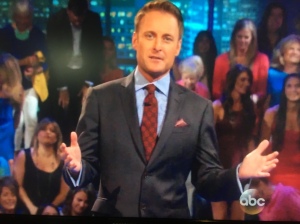 Alright – two weeks of real work and then it’s off to Tulum, and I’m back to 3 minutes of airtime and drowning myself in tequila the rest of the day. Suck it up, Chris…

Let’s introduce the guys! People actually cheer for Ian? Wow, memories really are short. JJ is still a “former” banker, so I guess he’s embracing his new-found reality career. Chris the Dentist looks dandy in his purple coat. Lastly, Ben Z, Jared, and Ben H are introduced to increasing levels of applause. The audience got so loud for Ben H, I thought Harrison was going to have to do an encore and introduce him again. Looking strong in the race for the next Bachelor.

But, before we talk to the guys, it’s Bachelor in Paradise! Crazy Carly, Ashley (both Crazy and Eyelashes), Jade, Kentucky Joe, Crazy Eyes Clare! There’s a lot of “crazy” in the names, which bodes very well for the upcoming season, but 2 nights a week? Every single week? My god; I’m going to go blind trying to keep up with that kind of schedule. I don’t know if I have it in me. Next, there’s Clorox’s most bleachable moments: 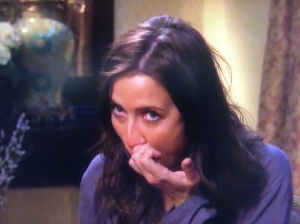 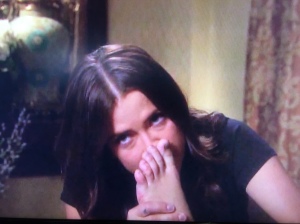 Funny thing, those pictures actually make me like Kaitlyn more. She’s definitely the kind of girl you go day-drinking with. And smell your feet with. Let’s recap the season and let the guys yell at each other for a while. Ryan the Junkyard Drunk; let’s welcome Nick to the group, everybody; apparently, Ian went to Princeton; and then this: 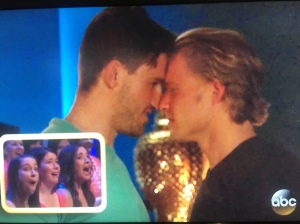 People start railing on Ian, who then pulls the biggest  upset of the night by getting on his knees and apologizing to anyone that ever had anything to do with the show. 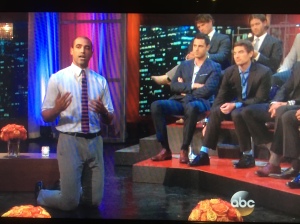 I haven’t done this since Initiation Night for the Ivy Club. That’s an exclusive club at Princeton. Did you know that I went to Princeton?

Next up is Clint, who tries to convince everyone he’s straight, and that showering with JJ was strictly platonic. JJ says they were “intellectually curious about one another, and there was a lot of meat to their relationship.” Not helping, bro. Then, Chris the Dentist and his lavender jacket say that they both thought Clint was awesome. Again, not helping, bro. Finally, someone says “Who cares? Why haven’t we talked about Nick yet?”

Ahh, yes – the guys are still pissed about Nick, and they’re mad at Kaitlyn, and she didn’t handle the situation properly, and did one guy actually complain about going on helicopter rides? Seriously? “Hey, do you know what it’s like coming out to LA and hanging out in a mansion, drinking free booze, and flying around in helicopters? You think Jay Z does this stuff for fun? It’s hard work, bro.” Bachelor Mansion isn’t exactly a 1940’s internment camp, is it? Cry me a river.

The guys finally quit bitching about the living hell of lying around half-clothed and half-drunk, and it’s time for the Hot Seat!

JJ – He gets an interview? Am I the only one that doesn’t get the appeal of this guy? Whatever. he apologizes to Clint, Jared calls him an acquired taste, and I don’t know who Cory is, but he talks WAY too much for a guy no one remembers.

Ben Z – Chris Harrison is serving up softballs and making him look really good. So good, that Ben H is starting to look nervous: 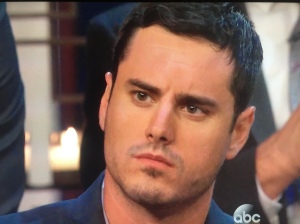 Come on! Say something stupid! Don’t take this away from me….

Ben Z is jacked, he’s sensitive, he talks about his Mom, and being on this show has taught him how to open his heart. Harrison asks if he’s cried yet, and Ben Z says “no” and the audience loooooves it. 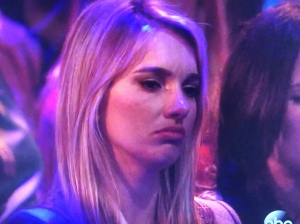 I want to be there to hold you when you cry, Ben… 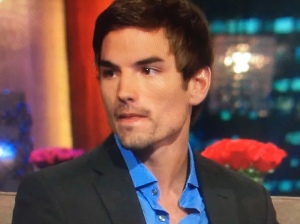 He shaved! Jared really loved Kaitlyn, it was really hard when he left, he hears the Cranberries, like, all the time, blah blah blah. He rambles on about being heartbroken, and Ben H is looking annoyed again: 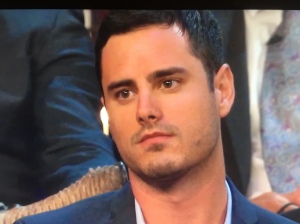 Dude, you’re going on Bachelor in Paradise. Pump the brakes a little…

Did anyone catch that part at the end, when Harrison plugs BinP, and Jared says, “yup, I’m going back tomorrow.” Are they still filming? Is there any way Nick can still get on the show? Assuming he loses in the finale which, of course, I don’t know; I don’t read spoilers. I think I’m just saying it out of pure hope that he gets dumped again, so he can sneak onto STD island and get all creepy/clingy with Clare. 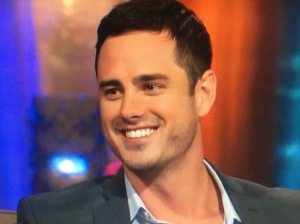 First smile of the night! To recap Ben H’s season: youth center, dancing, mauling, rowing, and did he really find a four leaf clover in a field? The dude had has eyes like Superman. Wow. Then he tells the story of how Kaitlyn snuck down to his and Shawn’s room and the three of them stayed up talking all night. When one of the handlers came down in the morning with that day’s itinerary, Shawn and Ben hid Kaitlyn under a blanket. 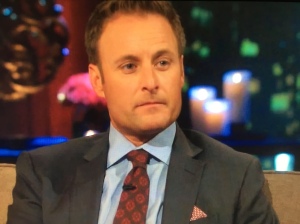 Ha! That’s a great story! What was that handler’s name, again?

I get the feeling a certain handler is going to get one of his fingers chopped off, yakuza-style. Chris Harrison doesn’t like security problems, and when Chris isn’t happy, people pay the price. Anyway, the audience loves Ben H, and I can say with absolute certainty that the next Bachelor is going to be named Ben. What’s that? Which Ben? Ummmm… 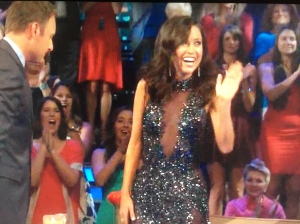 Sparkles! Which means this segment should be happy and light-hearted, right?

Wrong. To put it bluntly, there are some shitty people out there. I often wonder whether I’ve stepped over the line on occasion, and I hope I’ve managed to keep it funny without being vindictive, but those tweets went way beyond anything I could have imagined. Maybe I’m naive, but I was actually shocked and disgusted. Death threats? Really? It’s a television show – not a particularly important or thought-provoking one, at that – and people are treating Kaitlyn like she’s Osama Bin Laden. “I hope fans break her spirit so our kids can see that whoring behavior isn’t rewarded.” Really. And that was from a mother. 1) If you’re so offended, why don’t you use your cro magnon thumb to change the channel. 2) Why are you using The Bachelorette to raise your children? 3) I’ve known kids from ultra-strict, self-righteous households, and I got a newsflash for you, Ms. Mom-of-the-Year: It’s your daughter that’s most likely to rebel and end up on a stripper pole, so you might want to step down off your high horse and lighten-up a little. My god. I never cease to be amazed at the sociopathic behavior on so-called social media. If Kaitlyn can take any comfort, it should be in the knowledge that small-minded and petty people live miserable, angry lives, and they have no hope of finding any semblance of the peace of mind that the rest of us enjoy on a daily basis. Plus, they should all be a lot more nervous today, because Ben Z looked like he wanted to hunt a few of them down and have a long conversation in a dark alley. Don’t make Ben Z angry; you wouldn’t like him when he’s angry…

Whew…and with that out of the way, we can go to the sparkly portion of the evening. Jared talks a lot, but doesn’t really say anything. Ben H wants to know why Kaitlyn told Shawn about Nick but didn’t tell him. Why do you think? Because she didn’t like you as much. You’re in the lead to be the next Bachelor; don’t blow it by asking stupid questions. One guy complains about Nick, and Kaitlyn quickly points out that he voted for Britt. Clever girl; she’s quick on her feet. Kaitlyn apologizes for making mistakes along the way, but basically says that it’s hard to date 25 overly-sensitive bitches and get everything perfect, so sue her. She asks JJ and Clint if their relationship status is “complicated” – funny – and Ian gets on his knees again.

Are we done yet?

Nope. Bloopers: Kentucky Joe has to piss, birds, seagulls, pigeons, a stuffed goose, sumo cannonball, and Kaitlyn eats a bug. The bloopers weren’t great this year, I have to say. And a pretty boring episode, overall. We get some good Bachelor in Paradise commercials, though, especially the one where they call it a “Cray-cation”. Dammit, that’s a good line; I’m so pissed at myself for not thinking of it first. Hey, with the cut in the travel budget for The Bachelorette and the aggressive marketing for BinP, is it possible that the original show gets reduced to a feeder for the new one? Let’s spend the least amount of money we can and get as many nut jobs as possible on the Bachelor, and then send the craziest of the crazy to STD Island? It’s definitely looking like the more entertaining of the two at this point, and maybe ABC is shifting focus.

Next week, it’s Nick versus Shawn. They don’t like each other. Shawn still calls him “the other guy”. Maybe he’s just bad with names? Nick has a ring in the car – uh oh. The most exciting conclusion ever! See you then…

And what exactly this woman talking about? 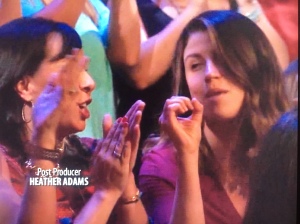 If Ben Z was the Bachelor, and I was on the show…