Bachelor in Paradise Week 2.2 – It’s Paradise, With a Hint of Game of Thrones

sociopath [soh-see-uh-path] – noun. a person with a psychopathic personality whose behavior is antisocial, often criminal, and who lacks a sense of moral responsibility or social conscience.

– sets goals based on personal gratification, without regard to whether achieving those goals is legal or ethical.

– manipulating others, such as pretending to be deeply interested in someone in order to achieve a goal.

– having a callousness that could be shown by not caring about others’ feelings, having no remorse when actions harm others, being aggressive or sadistic.

And with that out of the way, let’s break down the evening, shall we?

I confess to not being an expert on all things Bachelor. Lovely Better Half first introduced me to the show during Ben Flaccid’s season, so I don’t know any of the guys that came before. There’s been some less-than-stellar gentlemen over the past few years. Kalon, the Luxury Goods Salesman who graduated to celebrity “reporting” on TMZ, last I saw – he was a little douchey. Jesse was a bit of a womanizer. Ian (I think I heard somewhere that he might have gone to Princeton) was pretty arrogant. But they all pale in comparison to Kentucky Joe. Joe is officially King of the Dickheads. Let’s start with Juelia, who is still gushing over her date with the apparent man of her dreams:

I cannot believe how bad my butt hurts…

Hold tight, sister; you’re vacation is just getting started. Joe smiles reassuringly to Juelia, and then spends the rest of his time telling anyone who will listen that he can’t wait for Samantha to show up. So, to recap, Juelia (a single mom) was hanging out with Jonathon (a single dad), and Joe jumped in the middle and blew it up solely for personal gain. Maybe they weren’t a forever couple, but they had common ground and they were getting along and there were other available women for Joe to move in on. And look – no woman deserves to be treated disrespectfully, but I think that we can all agree that single mothers deserve a little extra-special treatment, and if you’re the kind of guy that’s a dick, you could at least try to be a dick to someone as shallow and depraved as you are. And if this franchise is anything, it’s a target rich environment for shallow people.

Next, as shabbily as he’s treating Juelia, I am shocked at how he treated Jonathon. After Jonathon warns Juelia, Joe deluges him with lies, and a confused Jonathon apologizes. Then, for no other reason than to fuck with him, Joe makes Jonathon apologize to Juelia. 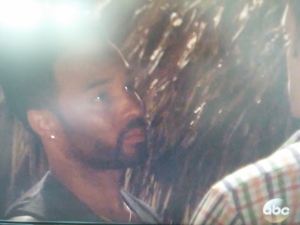 Then Joe consoles Jonathon, comparing himself to a proud father. I’m surprised he didn’t call him his son. He does, however, call him his “bitch” – and with friends like that, etc, etc…An interesting side-note about Joe’s insane rants to the camera, despite his tough talk about putting Mikey on the ground and making him his bitch, Joe gets real quiet, real fast when Mikey actually shows up. If there’s ever a reunion show, Joe better hope he doesn’t get locked in the green room with Mikey T, because he’s going back to Kentucky in a box.

I overheard you say something about brass knuckles, and I wanted to stop by and see if that was just bullshit or if you really do have a death wish…

Jared and Clare go on their boat date, and I love boat dates, but there are different kinds of boats. Power boats are nice, catamarans are better, but a full blown sailboat? Fuhgeddaboudit. I’d hook-up with JJ on a sailboat date.

ohhh, Jared, you so fine…I think I’m in love…

They sail to a crane on a cliff and go bungee jumping. Jared kisses Clare off the edge, she screams louder than any human being in history, and now we all know what Clare sounds like in bed. Back at home, Ashley cries a lot and calls Clare a cougar; I’m amazed at how young these people are to think 34 is “cougar” age. Ashley just needs to find someone as shallow and self-involved as she is; she needs to find her Kanye. Clare is on cloud nine, until she’s chatting with Jared that evening and he says he wants to see how things go, and be in the moment, and see where his feelings are. And then he mentions the 8 year age difference, which does not please her in the least.

Me: I think Clare looks great. Why would he even throw that out there?

LBH: Because she wants babies now, and he doesn’t.

Jared sits down with Ashley to let her know he’s still interested in her, but he wants to see how things go, and be in the moment, and see where his feelings are…and I realize that he’s playing these two off each other to stick around for another week. He’s giving them the same meaningless lines, being interested without committing – he’s definitely smoother about it than other guys, but he’s playing games just like everybody else.

Michael, the impossibly dry lawyer from Desiree’s season shows up, and he has a date card with Tenley’s name on it. Apparently, JJ checked out his Linkedin profile before the show started, and he was suitably impressed with Michael’s resume. Tenley and Michael go to dinner at a place where they have to walk on water to get to their table. Michael tells Tenley he came here for her and only for her about a hundred times, and then they’re surrounded and serenaded by an army of mariachi’s. Just to remind everyone, Josh got a date at a taco shop, and Michael is literally dancing on water. That’s not really fair, is it?

Mikey shaves and calls Clare his “beard”. I don’t think that term means what he thinks it means. Then he starts looking for a rose. He asks Juelia for one, but she says no. Then he tells her to kiss him, and she says no. He asks if she likes the pony tail on top of his head, and she says no….

Haven’t talked about this, but it was very well done. However, does anyone else get the feeling that Ashley I is the one person taking the opening sequence seriously?

This will make a great head shot…

The ceremony starts and Jared’s age comment has sent Clare into crazeballs mode.

“Last year was so much better. People were here to find love, and not play games and strategize. There’s nothing worse than having a rose without a real connection. I don’t know why I should even give one out. Tenley has 3 people to choose from and I don’t have any!”

And on and on she babbles as the ceremony continues.

Clare’s name is called, and never being one to shy away from some self-inflicted drama, she storms out in a huff. TO. BE. CONTINUED. (I guess we’ve brought that over from Kaitlyn’s season…) See you next week, folks.

– This episode of After Paradise was cleaner than the first one, and I can kinda sorta start to see how this show might work once they iron things out. I know she’s crazy popular, but I’m not sure Mollen is working. She’s not a natural interviewer and the snarky comments offend the contestants. They look more annoyed by her than entertained.

– Is ABC prepping Chris Harrison for his own talk show beyond the Bachelor?

– Dating hang-ups? For me, it’s the coffee date. Anytime a girl suggested we meet for coffee, I rolled my eyes and suddenly became very busy that day. What is this, a job interview? Grown-ups meet for drinks.