No comment. Actually, I have LOTS of comments, but I don’t need to lose readership. Anyway, Carly takes a break from flashing her crotch long enough to give us a recap, the gist of which is that everyone is paired up except Jared, Ashley I, Samantha, and Joe. Ashley decides to commiserate with Joe, because misery loves company, and her sister left to wait by the phone for her 2am ‘boyfriend’, so why not him. Joe tells his tale of woe while Ashley patiently awaits to discuss herself, and then she launches into a bout of crying and whining:

On what planet do you think I give a shit, woman?

He tells her he’s not really into emotions, but he does pause to ask who she’s giving her rose to, and now Ashley is crying because Joe didn’t want to listen to her cry. Literally, she’s crying about crying.

This poor girl is a train wreck. Jared is perfect, she’ll compare every guy to him and no one will ever measure up, so now she’s ruined, and she’s losing even more fake fingernails and she doesn’t know if she brought enough replacements. Just a mess.

Mikey gets a date card and asks Samantha out. Kidding, but that would’ve been phenomenal. He and Juelia fly to Guadalajara, which Juelia tells us is known for lovers. 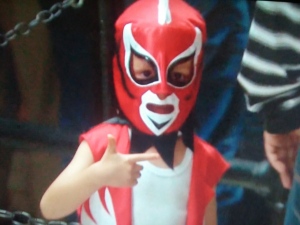 They watch Lucha Libre wrestling, they wrestle, they talk. I think they’re both happy to back in the game, but this is not a couple; the chemistry isn’t there. Or is it? The overnight date card shows up; Juelia hasn’t had a one night stand in 4 years and Mikey T is always ready go, so let’s hit the room! 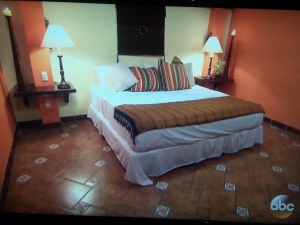 Is it really? I don’t know. I’ve seen some pretty ridiculous fantasy suites over the years, and that just looks like a room to me, but knock yourself out. Which, judging by Juelia’s bed-head the next day, is exactly what they do.

I haven’t had a connection in a while, and we definitely have a connection. We ‘connected’ our brains out. All night, multiple times.

Yup. I got nothing.

Joe & Samantha – even I don’t get it anymore

Joe still has this magic text message that will rain fire and brimstone upon Sayulita, and he’s trying to hold it over Samantha’s head. He actually says, “she has two choices: she can stay lovey-dovey with me, and we can get engaged and get married; or she can crash and burn.” Is he basically saying that if he can’t have her, no one can? Just checking, because that sounded a little creepy to me. Lovely Better Half says Samantha chose her sucker poorly. Got that right, baby; that boy is borderline psychopathic. Of course, she looks a little dangerous at times, too. He threatens to show everyone the damning text message and you can actually see Samantha’s blood turn ice cold: 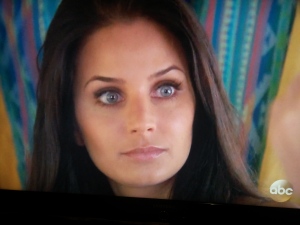 First, I gain access to his room with the promise of sex and then I slit his throat. Then, I wait until the camera crews are on a shift change, and I pack his body into 2 – no, 3 – garbage bags with about 20 of these crabs, and I hide him down by the rocks on the beach. By the time they figure out he’s missing, there’ll be nothing left of the body.

Have I mentioned that Samantha scares the hell out of me? But she doesn’t scare Joe, apparently, who still thinks he can rekindle the embers, so he asks Ashley I. for advice on what to do. Which is amazing to me, because Ashley I. and Samantha couldn’t be more different if they tried, and there’s no way that whatever Ashley thinks is ‘cute and sweet’ would work on Ms. Black Widow. He tries Ashley’s advice anyway (her advice being introducing himself as if they’ve never met and offering her a s’more) and it goes down like a lead balloon.

Justin from Kaitlyn’s season (weird face – looks like he’s been punched too many times) shows up and gets the rundown from the other Kaitlyn rejects. Joe practically begs him not to pick Samantha, but Justin says “Rose before bros!” and asks her out anyway. Get it, Joe? Rose before bros? Ring a bell at all? Deuces! As expected, Samantha says yes and a wave of shock rolls through the group. In all fairness, everyone’s already paired up and Ashley I. donned a veil of mourning for her dead relationship with Jared. Who else is Justin supposed to take on his date? Jorge?

Samantha and Joe sit down, and she’s just toying with him at this point. “My first date with you was so special, maybe the most special of my life. I want to explore other relationships. My feelings for you are so, so strong, but I’m not sure I feel that close to you. I would do anything for you. There’s so much drama, though, that I’m not sure I can put myself through this. I want us to start fresh. Together. With other people.” And Joe’s not the only one spun around by what she’s saying. I have to admit, this is girl is good at stringing guys along. He manages to look pretty pathetic, though. When you whine to a girl that you’re not good enough for her and then ask for a hug? Come on, bro – it’s time to throw in the towel and walk away with some pride. For all of Joe’s talk about Mikey and Dan and JJ, the only bitch I see in the room is him. And for all the hate flying around about Samantha, I have to hand it to her – people know who she is this season

TO. BE. CONTINUED. See ya next week, people…

– Jenny Mollen decided to leave her husband at home this week because he was the one person on this show more annoying than her.

– Joe was nervous, and I would be to. Those playbacks were brutal.

– “First of all, thank you for watching for the last 6 months.” That’s why Chris Harrison is the best.

– Juelia vs Joe was like 10 minutes of running into your ex at a party, only televised for the world to see. Holy awkward.

– Nice head fake with Crazypants Nick, I bought it. Congratulations Ben H, and welcome to every man’s dream. Just be careful what you ask for. As CC Deville infamously said during Poison’s Behind the Music: “It was the house of whores, and then it became the house of horrors.”