The Epic Two Night Season Finale is here, the crazy train is pulling into the station, and, like 8 of our intrepid contestants, I’m ready to get off. Which couples will make the most important commitment of their lives? And which couple will have the most dramatic breakup in Bachelor in Paradise history? A history that spans almost 2 whole seasons. Nice to see The Producers haven’t lost their inclination towards hyperbole. But first, another look at the intro: 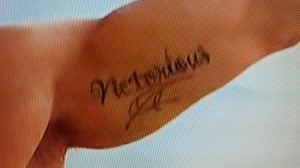 What kind of inflated self-image do you need to have to get “notorious” tattooed on your bicep?

We pick up with Jared and Ashley I going to their fantasy suite. Jared babbles a lot of open-ended bullshit about love without actually saying the words “you” or “Ashley” (“Love is amazing, it feels good when someone cares, love works in mysterious ways, Endless Love by Lionel Richie…that’s a cool song”) – so he’s not interested. Ashley is still staying positive in her interview.

Jared has the most amazing face AND I’m not going to be a virgin forever, soooo…why not now and why not on tv?

By the way, she’s wearing very little makeup and her hair is kind of messy, and Lovely Better Half and I both think this is the best she’s looked all season. Ashley can look twice as good by cutting her prep-time by 90%; she needs to start taking advice from someone besides her sister. Anyway, we’ll catch up with Ashley and Jared later in the show.

Tenley asks Jorge for a mimosa party, and he says he’ll take care of everything just as soon as he’s done dispensing some relationship advice to Juelia.

Mikey is a good guy, a man of his word. But, on the off chance it doesn’t work out…you know…give me a call…

With production wrapping up, the theme of the night is Relationship Assessment, and Mikey and Juelia kick things off.

Mikey: She’s cool. The sweetest, nicest person. And she’s refreshing, you know? Like, the way lemonade’s refreshing on a hot summer day. But, you don’t marry lemonade…

So, the two of them talk, and Mikey does as good a job as he can do, but it’s still not what Juelia wants to hear, and she runs off to pack for home.

Yeah, especially with no sunscreen. Curiously, even though Juelia is leaving, Mikey decides to stick around to make one last Hail Mary at love.

First off, nice to see Jaclyn shopping from the Jillian collection:

After getting card-blocked by Ashley, Jaclyn still needs to find a date, so she asks Puffy Faced Justin, who says ‘yes’. And he stands by his answer for about 30 seconds until Cassandra from Juan Pablo’s Season jiggles into Paradise. Of course Cassandra asks Justin, and of course Justin says yes, because he’s not blind. How is it possible that this guy has two dates in one day? He’s not that good-looking. I guess it pays to be the last single man standing.

Jaclyn’s not happy, but have no fear, because here’s Nick to come to her rescue! Wait, scratch that – he just wants her date card so he can take out Samantha. Notorious, indeed. I forgot he was the guy that bent everyone over on Bachelor Pad, which oddly makes me like him more. Anyway, Jaclyn makes him roll around in the sand, which seems kind of light to me. Guys have been crawling all over each other for a chance to breathe the same air as Samantha; Jaclyn should have made him do more, like run through downtown Sayulita with a couple crabs in his shorts. 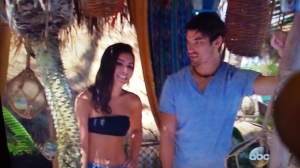 The room was awesome. It was really great to relax. And talk a little bit. Ummm, so…yeah. See you guys later!

They go horseback riding, Cassandra takes her top off, and Justin almost falls off his horse. They’re both parents. Cassandra is excited to meet a guy that can take care of something more complex than a houseplant. Justin is excited that Cassandra took her top off. They maul each other on the beach.

Carly: I don’t understand why guys are fawning all over her. She’s just so…ummm…

Clearly, Jade gets it. Nick and Samantha leave for their date, and Nick says it’s the best date he’s ever been on before they even get to where their going. Dude, try to play a little hard to get. My god. It’s another food date, and LBH and I are drooling at the tv, because we’re old and boring. 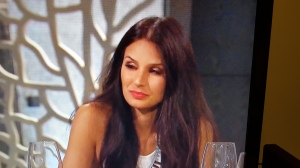 And then it hits us: Samantha is NOT going to age well. Mark my words: she’s going to have to rely on her personality for the second half of her life, and it’s going to be a VERY rude awakening.

And just like Dan and Joe before him, Nick is in love. Samantha wants his rose, and he practically genuflects as he replies “yes, ma’am”.

Last night was so good! I just love watching him sleep. He looks perfect when he’s sleeping. I’m so in love, I just want to keep him asleep in my bed forever…

So, Jared fell asleep and you stared at him like a psychopath, and that’s a sign of progress? Ok. Let’s check in and see how Jared feels:

Holy crap. I have to tell Ashley I have no interest in dating her or anyone remotely like her. I think I’m going to throw up…

Jared does his best to let her down easy, but it’s an impossible task, and she takes it like she takes all bad news.

And since Ashley’s Fairy Godmother said her stay in Paradise would end when the last fake nail fell off, it is clearly time to go. Jared packs up and leaves (about 3 weeks too late, if you ask me. What a downer that guy turned out to be), and Ash is devastated. I know I make a lot of jokes, but I actually like Ashley I. Despite a certain naiveté, I think she’s a bright, sweet girl and she just needs to lighten up on herself. There are a lot of guys out there; you’re going to be just fine.

What’s up, baby? I just back from marlin fishing with Jimmy Buffet and the President of Mexico. Where’s Jared?

How good is Mexico treating Chris Harrison? By the end of Kaitlyn’s season, he looked like he wanted to eat a bullet. Now? Looks like a new man. If Ben H’s season isn’t filmed entirely in tropical climates, Harrison might have the location coordinator ‘disappeared’, if you catch my drift. Tonight, everyone will forego their drinks and move straight to the Rose Ceremony. Everyone, that is, except Ashley I, who says she grew up a lot, but it’s time for her to go home. Just to reiterate, Bachelor in Paradise was a growth experience for Ashley. That’s a strong statement. On to the ceremony, and how is Ashley S still here? LBH: “She’s not crazy, she’s just a bad drunk.”

Nick picks Samantha – “She’s amazing. I think we have such a strong connection. I really see a future for us outside of Paradise. What? You’ve heard this from other guys before? What’s that supposed to mean?”

Dan – “Ashley S, you’re nuts. Amber, I’m flattered but not really digging it. Samantha, last week I thought we were getting married, this week you went out with Nick. And since Justin just snagged Cassandra, I’m gonna leave.”

Mikey T – outtanowhere, offers his rose to Mackenzie, who flat out says no. And then Mikey starts debating the risk/reward of offering his rose to the rest of the girls one-by-one…

If they all say no, I’ll never hear the end of it…

…and decides to leave rather than drag it out. So that means it’s goodbye for Ashley S, Jaclyn, Chelsea, and Amber. Carly thinks it’s really sad to see people go home without finding love. She saw last season, right? With the exception of Marcus and Lacy, literally everyone went home without finding love. Why does everyone pretend the success rate for this show is higher than it actually is?

But that’s neither here nor there, because it’s off to the palapa for PHASE TWO, where everyone gets a 1-on-1 date and a fantasy suite. Condoms for everyone! 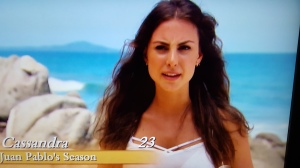 Umm, I just met this guy yesterday and now I have to sleep with him? That’s how I became a mom…

The girls go talk; the boys go talk. Nick is super-excited for an overnight date, because he doesn’t yet know that Samantha bites the head off her mate after sex. Josh is also excited. 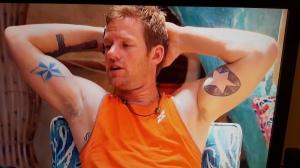 I gave Nick a hard time about ‘Notorious’, but at least that’s a word and he knows how to spell. Josh gets a star tattoo. And then, because he liked the first one SO much, he gets another star tattoo. Not exactly out-of-the-box thinking…

You can add Carly to the list of super-excited people. Kirk? Not so much.

Tanner: What happened in the past week to change your mind?

Kirk: She said she wanted to have my kids.

And so Kirk breaks up with Carly, and she doesn’t see it coming at all. He talks a LOT, and she completely shuts down, which makes me feel worse because she handles it like she’s been here a few times. Then Carly runs off, and Kirk has the balls to say “What just happened?” What do you think just happened, dude? You just dumped a girl that wanted to marry you. What kind of reaction were you expecting?

And now everyone’s pissed at Kirk, because, as Tenley says, he could have slowed it down and put a stop to it before things got too serious. And she’s right. But I can see Kirk’s side, too. It’s a vacation fling – you go with it, and your thinking gets very short-term. You say stuff like “yeah, I’d love to have kids” and “where would we live if we moved in together” and it’s all theoretical because you’re surrounded by palm trees and umbrella drinks, and you don’t need to take it seriously yet. And you don’t want to take it seriously, because it’s fun, and why kill the moment. Next thing you know, you’re standing in the airport lounge and reality is looming on the horizon, and you think “holy shit, am I really going to spend the rest of my life with this person?” It still sucks for Carly; she’s a complete sweetheart, and there’s no one LBH and I were rooting for more than her. But I can understand how this played out the way it did.

What I can’t understand, on the other hand, is why Kirk keeps trying to talk to her. “She wouldn’t let me explain.” You talked for 8 minutes straight; you had your chance. And it doesn’t matter what you say, anyway. When someone dumps someone else, they’re the bad guy – end of story. I won’t go so far as to call him devious or a liar, but he’s going to be the bad guy, and trying to explain himself won’t change that. It’s the way it is; suck it up and deal with it.

So, Kirk and Carly pack up and head to the airport in separate cars, even though you know they’re booked on the same flight back to LA. Awkward. Carly is pretty banged up, but she’s a catch, and no dust is gonna settle on her. That’s it, and I can’t believe I spent 2 hours on Labor Day writing this. See you tonight for the Most Dramatic Conclusion in Bachelor in Paradise history, followed immediately by the final television appearance of Jenny Mollen.

And now, Tenley has a Janet Jackson-esque wardrobe malfunction.