Bachelor at 20 – Am I Really Writing About This?

So, Lovely Better Half just asked if I was writing a blog post, and when I said “Hell, no”, she was borderline pissed off. No offense, but I have very little interest in these anniversary shows. You want a recap? We see a bunch of clips of stuff we’ve already seen, and then Tanner and Jade got married. The End. But, LBH is glaring at me something fierce AND it’s Valentine’s Day and I don’t want an argument, so here it is: a real time, unedited rundown of The Bachelor at 20.

Chris Harrison rocking the tuxedo. He looks alright, but we just finished watching Spectre, and as badass as CH is, no one wears a tux like James Bond. Wait, if Daniel Craig is out, maybe Chris Harrison for next Bond?

Michelle Money still goes by the name ‘Michelle Money’. when she goes to parent-teacher conferences, do the teachers call her Ms. Money? Which again is weird, because we just finished watching Spectre, and all I can think of Ms. Moneypenny. Maybe Michelle can be the next Bond girl?

Ashley I’lashes is still putting the full-court-press on Jared. And considering he’s still single because he STILL hasn’t managed to get over Kaitlyn, why not?

Do you think Britt and that clown that got sent home the first night of Kaitlyn’s season are still together? Are they still pitching their spin-off show, Britt and Brody’s Awkward and Never Ending First Date?

It was before my time and I don’t know him, but one thing I do know, is that you don’t interrupt Jake Pavelka.

I can watch JJ slap himself on repeat all day, every single day. Same goes for Jason Mesnick crying.

Crazy Ashley S is engaged. Oh yeah, AND seven months pregnant, ergo, the engagement. God help that poor guy. And her hair is a lot less blonde since she got pregnant and can’t dye it anymore. Are you telling me some of these girls aren’t real blondes?

After watching the horse bloopers, I’ve determined that The Producers should never have another beast of burden on this show again, or someone’s getting sued.

Arie from Emily Maynard’s season is creepy. He looks like the kind of guy that masturbates 12 times a day.

Ashley and JP’s kid is 1, and he’s freaking huge. What are they feeding him, corned beef? The Girl is 1 year old, and it looks like ‘Fordy’ swallowed her whole.

It’s kinda funny to see Chris Soules and Crazypants Nick sitting next to each other at the wedding. The women are steering clear, and those two are closing the bar down tonight, both together AND alone, if you catch my meaning.

The Bachelor Pad recap was completely amaze-balls. How did that ever get dropped for Bachelor in Paradise? 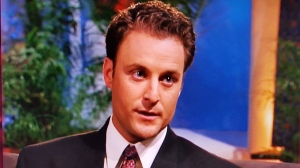 Lacy and Marcus kind of got the short end of the stick, no? They got married on some random segment on BinP, and Tanner and Jade are getting the full 200 guest, Dana Point Ritz Carlton Valentine’s Day treatment, complete with a performance by Matt Nathanson. Wait, who?

Tanner couldn’t bother to shave for his wedding day, huh?

Chris Harrison: “All of us today have our own love stories.” And then they focus in on Crazypants Nick, who showed up solo, and is staring at his shoes between vengeful sidelong glances at Andi Dorfman. Now that’s funny stuff…

Do you think that Matt Nathanson is pissed that more people recognize Crusieship Carly than him?

And do you think Juan Pablo is pissed that Ashley I’lashes’s little sister got an invite over him? Of course not – dead people don’t get angry!

Seal just played a concert with Matt Nathanson (?) and Cruiseship Carly. Been a LOOONNNGG time since the Heidi Klum days, huh pal?

Again, people are having fun, knocking back drinks, dancing the night away, and Jared is sitting on the steps with Ashley I, yawning and moping and being noncommittal. I want to party with that guy; he’s a MADMAN!

Tomorrow night: Ben shows the remaining ladies the movie theater where is heart was forever destroyed after a midnight screening of The Devil Wears Prada. See ya then, people!