The Bachelorette – JoJo Week 3 – A Lot of Talk, Still No Fighting

You ever wonder about Chad’s sales pitch when he’s pushing “luxury” real estate? “I’m not prepping an open house for a bunch of people I haven’t even met yet.” Or “Look at this house as a protein shake. You mix in the 4-car garage, 5 en-suite bedrooms, and the pool house, and you’d get totally yoked, and you could do pull-ups in the gazebo.” OR “If you don’t buy this fucking house RIGHT NOW, you’re gonna be spitting teeth!” I’m guessing a lot of people in the high end of the real estate market don’t respond well to those tactics, but what do I know…

I do know that the mansion looks like a complete disaster, and the Interns are huddled in a safehouse, fearing for their lives:

If I have to clean this crap up one more time, I’m going nuclear on everyone within 100 yards. You do NOT want to make me angry…

Alright, we get you have the erectile dysfunction problem solved, Now you need to do something to turn her on, and that tank ain’t doing it…

The Boys Get Jacked 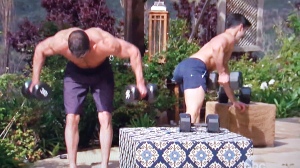 Ummm, Evan? What are you doing?

It’s an intimate yoga date! It was weird an uncomfortable when it debuted on Bachelor in Paradise II, so why not bring it back for this season? Our couple starts off by inducing an “angergasm” (which sounds very un-yoga-like to me), and JoJo immediately thinks “Why didn’t I invite Chad instead of Chase?” Then, JoJo straddles Chase while they embrace in 110 degree heat, and things get steamy:

Let’s have dinner and some conversation.

JoJo: Thanks for being a good sport today. Most guys wouldn’t go for something like that.

Chase: Umm, you were riding my pelvis and your boobs were in my face. Most guys actually pay for that.

JoJo: Well, you were very sweet, and I think it’s important to feel safe and protected.

Chase: Yeah. It was yoga…I don’t think our lives were in danger.

JoJo: Tell me about your family?

Chase: My parents were divorced, so it’s important to me to only get married once.

JoJo: Do it once, do it right.

JoJo: Love is all you need.

And on and on. A rose for Chase, followed by a private concert (check!) by Josh Elly? Roz Kelly? Whoever, Chase’s new “favorite artist of all time.” JoJo is officially sprung over Chase, and they dance and maul each other while Chaz Nelly plays on through the night.

Group Date – Love Has No Secrets

The Players: Jordan, Grant, Wells, James F, Christian, Ali, Daniel, Vinny, Nick, Evan, Alex, and Chad. The Game: Telling embarrassing sex stories to a live studio audience. If you’re thinking that Chad doesn’t cope well with public embarrassment, you would be right, and he handles stress and nervousness in much the same way as my 2 year old: by throwing a tantrum. The boys get in another shouting match (will these guys just shut up and fight already?), and it’s off to the limos. 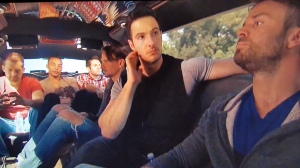 Actual conversation during this scene:

Lovely Better Half: Who’s the gay one again?

LBH: Not the swimmer, the other one.

Me: The swimmer is Robby. Daniel is the male model.

The guys get 45 minutes to put their stories together, and you know the one person who is definitely NOT participating? JoJo, because if her brothers found out, they’d ground her for life, and then she’d be stuck at home, drinking wine out of the bottle with Mom. The monologues are actually pretty entertaining. Daniel’s story about tying a girl up and cutting her hair off certainly paints him in a new an creepy light. Evan delivers a public service announcement on steroid use aimed directly at Chad, and everyone is greatly entertained…

…except Chad, of course, who looks like he’s going to kill Evan in his sleep. But he manages to keep his cool. Wait, no he doesn’t. He shoves Chad, rips his shirt, and then brings JoJo on stage and tries to kiss her. Crashing and burning, he storms out of the room and punches a wall, and JoJo is pretty much ready to send him home right now. Chad shoves Evan, threatens to kill him, and the leaves to pump some iron, while Evan seriously questions his monologue choice:

Holy shit! I think I just peed myself…

It’s night time, and the guys are ready to open up about their feelings:

Jordan: In my last relationship, I cared more about football than her. But I feel like I’m ready to care about you more than football. Unless the Packers are playing. (awww…)

But the big drama is Chad vs Evan. Evan follows Chad around the house; he works out when Chad works out; he cooks when Chad cooks; he talks shit about him on group dates. Yeah, Chad is arrogant/insecure and unstable, but there’s something weirdly manipulative about Evan, too. He’s clearly trying to get in Chad’s head and make him snap, and he better be careful, because that’s a dangerous game to play when Chad’s built like Chad and Evan’s built like Evan. Moral victories don’t mean much when you wake up in the hospital. The final straw is when Evan interrupts Chad’s 1-on-1 time with JoJo, and Chad walks way infuriated, until he passes a mirror:

Hey there, good-lookin’! What’s a fine man like you doing in a place like this? Man, my hair looks AMAZING. What was I mad about again?

Evan, who is under the misconception that Week 3 is a good time to throw down ultimatums, decides to throw down an ultimatum. “I’m leaving if Chad stays.” Uh-oh, this is not going to fly with our girl. So, JoJo looks at this dainty soul and his erectile dysfunction business and his 3 kids from another marriage, and says “I like you, Evan, and I think you’re amazing, and you have an amazing heart…” and here it comes…”so would you accept this rose?” WHAT? Not to take Chad’s side on this, but seriously? Ultimatums NEVER work, throwing people under the bus NEVER works, and certainly not in the 3rd week. LBH thinks JoJo’s is calling Evan’s bluff, and she’ll give Chad a rose, too, daring Evan to leave. Which is a great move by JoJo, assuming Chad can make it to the Rose Ceremony without going completely berserk, which he might not. When Chad is incredulous that Evan is staying, JoJo puts him in his place, point blank: “You’re being incredibly rude right now, and it’s one of the things about you I DON’T like!” And then I get a small facial tic, because she sounds exactly Lovely Better Half when I’m acting like an idiot. And, as if reading my mind, LBH says “Good for you, JoJo!” and I can feel her eyes burning into the side of my head. Weird end to a weird date.

Sorry, baby, the card is for James, and he and JoJo are off to take swing dancing lessons. In a show with a long history of bad dancers, James T ranks pretty much at the bottom. It is flat-out painful to watch. JOjo wants to see if James can break out of the friend zone, and if being a good dancer = being a good lover, these two are keeping in touch on Facebook. They meet that night for more talk, but JoJo doesn’t look like she’s feeling it, which leads to the most difficult talk any Bachelorette can have:

JoJo: Thanks, but I wanted to say…

James: I’m the luckiest guy in the world to be here with you right now.

James: ‘Cos I just don’t feel like I’m good enough for a girl as perfect as you.

JoJo: No, James, you are good enough. You’re an amazing guy, and you’re good-looking and funny and kind, and you have so many wonderful qualities that will make you an amazing husband someday. But –

James: When I was younger, I was tall and gangly and had big ears and everyone made fun of me because I had a big neck.

JoJo: [collecting her breath and gritting her teeth] BUT…would you accept this rose?

She just can’t send him home after he says crap like that, right? I can’t see this one working out. But then. he pulls out his guitar, and he’s not dorky-awkward-James anymore; he’s singer-songwriter-James who’s got mad game and he makes JoJo cry for the second time this season, and I think he might have a chance after all.

And then there’s a heavy maul session, with tongue. James should never talk; he should just sing all of his lines. That shit’s working for him. 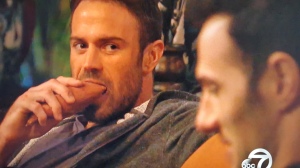 Chris Harrison interrupts tonight’s episode of Pumping Iron 3: The Bachelor Years to announce that there will be no cocktail party. But there will be…a pool party! Yes! Everyone is very excited to see JoJo in a bathing suit, except for Chad, who “knows exactly what she looks like under that dress.” Aww, such a romantic. Evan follows Chris Harrison outside to tell him how he fears for his life because he made the mistake of screwing with Chad one too many times. 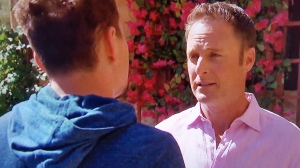 Harrison: So, let me get this straight. [laughs a little] You started pushing Chad’s buttons?

Harrison: And now that you’ve pissed him off, you’re scared, and you want me to clean up your mess?

Harrison: [gazing wistfully at the horizon, while memories of a heady youth run through his mind] Ahhh, Evan. Back in my cage fighting days, I used to eat guys like you for breakfast.

Evan: [stuttering] You…you used to fight guys like me? In…in a cage?

Harrison: No, Evan, I fought men in a cage. Guys like you, I used to literally eat. Usually in a noodle soup, with some ginger and onions thrown in. Kind of like a Pho.

Evan: How – how could you do that?

Harrison: Eh, put enough hot sauce in there, you can eat anything. [shakes his head, returning to the present] Ok, I’ll do this thing for you, Evan. But you will owe me a favor. Someday I will ask for that favor, and when I do, you cannot refuse. You must do whatever it is, no questions asked.

And then Chris pulls Chad aside to lay down the law:

Harrison: Alright, so the guys are scared and they say you’re on steroids.

Chad: No, I’m not scaring anyone. And I didn’t bring any steroids with me. I cycled out before we started filming, just like you said.

Harrison: Good. I’m not sending you home, you don’t have to leave, just try to relax. But if you do go home, I have a business proposition for you. I have some friends in the Far East who’ve laundered a great deal of questionably-earned money through Shanghai real estate, and they can use a salesman with  – how do I put this – a more aggressive sales technique. Interested?

Harrison: Good. Just one thing: if you sign up for this, don’t you fuck me, Chad. Don’t you ever fuck me.

And with that, Chad returns to run through the mansion like the Tasmanian Devil on a 3 day speed binge. Looks like much violence ensues tonight. See ya then, my friends.