The Bachelorette – JoJo week 8.2 – Men Tell All. Or At Least Yell At Each Other. A Lot.

Two episodes in two nights? And one of them is Men Tell All? Yeah, the second post is going to be bullet points. Let’s roll.

Why is this guy yelling at everyone? 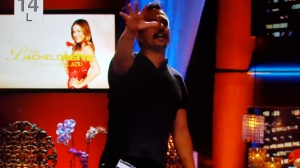 You! AND your friends! No check patterns in the audience! Go to overflow, NOW!

Chad gets his own trailer? Big cheers from audience for Chad, by the way.

Previews of ‘Bachelor in Paradise Tres: La Isla Mas Loca’ look AMAZING. Chad: “Fuck YOU, Chris Harrison!” Really? Do we finally get to see Harrison go medieval on someone? Plus, Canadian Daniel: 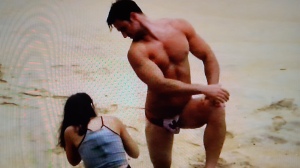 Twins are back. Jared makes another appearance (groan…another season of this guy moping around? No thanks). The prospect of watching Crazypants Nick get dumped (for the third time!) by Amanda is spine-tingling. This starts next Tuesday? Holy crap, no rest for the wicked.

Biggest cheers for Luke, by far, but Chase was close. James Taylor and Wells with honorable mentions. Luke looks nervous, by the way.

The season recap – wow. These guys really didn’t get along. And it doesn’t take them long to launch into each other. Even Chris Harrison is laughing, but quickly catches himself when he realizes he’s on camera. 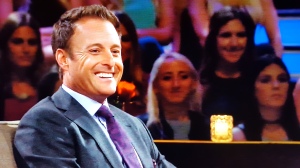 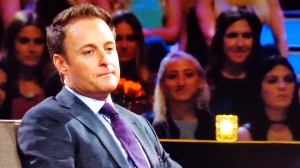 I can’t tell who everyone hates more, Alex or Chad.

Evan looks like he wants to pee himself when Chad walks in. Even the security guy looks uncomfortable. 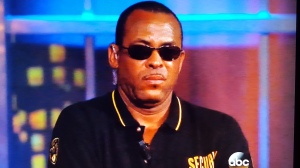 Seriously, WHAT is this guy going to do if shit goes sideways?

Wells: “What does a luxury real estate guy in Tulsa do?” Good question.

Chad hooked up with Grant and Robby’s ex-girlfriends? A dick move, but I love this guy. I also read somewhere that he was buying internet domains in other contestants names, and having them redirect to his own Instagram account. That’s flat out funny.

Nick B (aka Santa Claus) just put Chad on the Naughty List. I didn’t picture him as the tough guy in the group. I’ll give it to Nick, though; Chad didn’t stand up to him.

When are these guys going to realize that you can’t win an argument against a guy that loves to argue? Chad is obviously damaged. What is less obvious, is that he’s so simple-minded, he’ll never look deep enough within himself to fix his own damage. Let’s just send him back to Paradise, and mercifully end this segment.

“Luke’s exit was probably one of the most shocking in Bachelorette history.”

Luke has fuzzy ears. Is that a weird thing to notice?

What is Luke talking about, “could have been more expressive”? All he did, all season long, was express his feelings.

Chris Harrison: “Where do you go from here?” Luke: “The Bachelor. Obviously.” Good interview. Chase is going to have to hit a homerun to steal The Bachelor Sweepstakes from Luke.

“He made it all the way to Fantasy Suite only to get blue balls at the last possible moment. Ladies and gentlemen – Chase.” Awww…..

Lovely Better Half’s infatuation with Chase is starting to disturb me. It’s gone way beyond her Shawn Gosling obsession.

JoJo is still in fighting shape months after filming ended. She looks fantastic.

“Thank you for letting me love you and allowing me to love again.” Relax, Luke; you got the job already.

Chase makes a strong move joining JoJo on the couch. Not strong enough, though.

JoJo understands Chad. Completely and 100%. And he’s not worth her time.

Bloopers! Lots of bugs. Lots of dogs. Breaking glass everywhere. Monkeys drinking Sprite. And JoJo getting motor-boated by a horse.

Next week? Jordan or Robby? Robby or Jordan? Bachelor Nation is on the edge of their collective seats. See ya then, my friends…