Bachelor in Paradise Tres – Week 6.1 – Let’s Talk About Our Relationship

Oh, man…when has this EVER worked out? I wonder if Josh is feeling more confident than I am right now?

Are You Gonna Eat That Chicken?

Let’s see what’s going on around the house, shall we? Grant and Lace are talking.

Grant: Don’t be scared; be excited.

Lace: But this is scary.

Ok. What else? Nick loves Jen’s giggle. Apparently it’s his favorite thing about her. Except for her boobs. And that she helped rehabilitate is image so he could be the next Bachelor. So, her giggle is his third favorite thing, I guess. And then Nick drops this little gem: “Nothing against Andi and Kaitlyn, but they’re just not for me.” Right, because, you’re the one that decided to end things with them. Any other bits of revisionist history you care to share with us tonight, Nick? Here’s your next Bachelor, ladies and gentlemen.

But the big news is the late arrival of Mr/Mrs Irrelevant: the last person to show up on the last day, and who has no hope of hooking up with anyone. Everyone say ‘Hi’ to Tiara the Chicken Enthusiast! 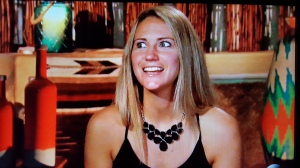 I’m SO excited to be in Paradise! What week is it? Has anyone coupled up yet? Oh, look! Nick’s coming over to talk to me! That’s so sweet of him….

It would be sweet, Tiara, except that Nick isn’t trying to make you feel welcome or get to know you better. He’s here to tell you that everyone is paired off, no one’s going on a date with you, so you should just give your date card to him and go sit in the corner by yourself. Classy guy. Again, here’s your next Bachelor, ladies and gentlemen.

Nick & Jen – Tell Me Your Fortune

They walk around a carnival, plays some games, and sit down with a fortune teller.

This first card represents Chris Harrison holding a bong. This second card is Jorge with a cocktail shaker. Together, they create Paradise…

Madame Fortuna (completely unprompted, I’m sure), tells Jen to temper her expectations, because Nick is on the short list for the Bachelor and he’s avoiding commitment. Next, they discuss their relationship. Jen says she never used to believe in horoscopes before. Don’t worry, Jen – your wariness of astrology should still be alive and well, since that wasn’t a horoscope. Nick mumbles about breaking down walls and recycles some old lines from Andi and Kaitlyn’s seasons, and then they attack each other’s faces.

Live By The Sword…Ummm…Hey Izzy – How Does That Saying Go?

Izzy loves Brett the way Josh loves pizza – in a moaning and inhaling kinda way. Unfortunately, Lauren H wants to take a run at Lamp Man, too, and Brett digs a Midwest girl with a freaky side. So, it’s time to say goodbye to Izzy.

Brett: So, I’ve really enjoyed my time with you. I think you’re an amazing person. But, I feel a connection with Lauren as well. It’s almost as if someone drew up my perfect image of a woman, and it was Lauren. And I owe it to myself to see where that goes. Does that make sense? 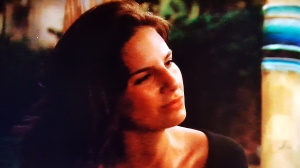 Izzy: Yeah, I got it, I’ve heard all this before…when I said it to Vinny. I should probably go, I guess..

Brett: Ok. That would make things a lot more comfortable for me and Lauren.

Come on, Brett – how about a parting gift for Izzy? A desk lamp? Maybe a pen light? No? nothing? Oh well. Izzy suddenly feels VERY dumb for dumping Vinny, because, well, she is dumb. She says she broke up with Vinny because she was ‘terrified’, which is complete bullshit. If Brett had given her a ring this week, Izzy would’ve jumped all over him and never thought about Vinny again. But things backfired and she needs consoling, so she gets Vin up on speed dial.

Absolutely the best part of the episode. 1) Izzy’s phone clearly said ‘Vinny’, so she kept him around as backup. 2) Vinny didn’t know who was calling, which means he deleted her shit right away. Izzy: “I realize I made a huge mistake letting you go, so I decided to leave Paradise so we can start over.” What?! Brett dropped her like a hot rock. Izzy saying she decided to leave on her own is like Nick saying Andi wasn’t for him. Why do people lie when there’s video evidence of every single thing they do? Whatever, Vinny’s not buying it. “I have no more feelings for you. You threw it all away for a dude with a lamp. There’s no coming back from that.” Click. Slam the door shut, brother – good for you. And now Izzy throws up on the side of the freeway. Best of luck, sweetie. 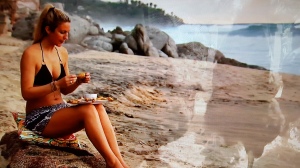 Where’s Nick? He said he was bringing my date card right back…

Tomorrow, everything changes. But tonight, Wells is the man of the hour. He’s the only single guy left, and no less than 4 women are vying for that final rose. Obviously, Ashley is the best choice for Wells (according to Ashley). 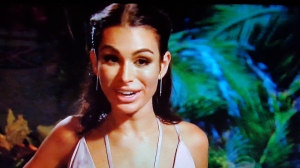 Wells mauls Jami. Then he mauls Ashley. Then Shushanna storms out, because every guy she’s ever met has kissed her ass and she has no clue how to compete for man’s attention. Wells chases her down to talk, but I secretly think he just wanted to make out with 3 girls in one night, since he knows it’ll never happen again in this lifetime. No joy, and Wells shuffles back to the Palapa of Lost Opportunity in time for the Rose Ceremony.

Remember: tomorrow, everything will change. What do you mean, ‘I’ve already said that three times tonight’? Well, I am a little loaded…

Josh picks Amanda – “Mmmm. I love you SO MUCH. MMMMMM!”

Nick picks Jen – “Andi, I mean Kaitlyn, I mean Amanda, I mean Jen – will you accept this rose?” Mumble-Mumble-Lisp-Mumble-Kiss.

Grant picks Lace – “Were we supposed to make a speech?”

Evan picks Carly – This couple is so weird, but they’re actually starting to grow on me now.

Brett picks….no one? – “No spark, no rose. Later on.” He says he didn’t want to lead Lauren on, especially with a Fantasy Suite on the line. Why? Lauren’s a big girl, she can make her own decisions. No one’s contractually obligated to get married. And I got a newsflash for all the guys out there: girls don’t necessarily want a long-term relationship with every guy they hook up with, either. As long as everyone is mature and respectful about it, there’s nothing wrong with a little NSA fun. But hey, whatever works for you, lamp guy.

Wells picks Ashley I – Poor Jami can’t catch a break. She seems so cool and normal, too.

Amanda: I can’t wait to introduce you tom my kids.

Josh: I wonder if I can order a breakfast pizza…Wait – what? You have kids?!

Everyone gather in the Palapa of Change for your new instructions. People need to have serious discussions. Be honest with yourselves. Be honest with your partners. And when you think you’re done talking, it’s time to talk even more. So basically, it’s all relationship talk from here on out. The Producers really need to find a more exciting way to wrap the season up; Paradise is too entertaining to take itself this seriously. Anyway, guys and girls split up, and Carly freaks out about the Fantasy Suite.

It was the same time last year that Kirk dumped me. Hmmmm, Kirk…he was really…MASCULINE. I wonder how he’s doing….Huh? Evan? Oh yeah, if he dumps me I’m cutting his balls off.

Good luck finding them, Carly. Ashley is super-excited to sleep with Wells. She’s ready for her Long Winter of Chastity to blossom into the Spring of Womanhood, and she’s ready for it tonight. Wells, on the other hand, is having some second thoughts, and he’s not sure he wants that kind of responsibility. To put him at ease, Nick says that if he “takes Ashley’s virginity, he’ll be a national treasure.” Nice. Once again, ladies and gentlemen, here’s your new Bachelor. Nick’s pubescent advice notwithstanding, Wells decides he’s not taking the next step, and pulls Ashley aside to say he’s leaving. I brace myself the impending water works, but to her credit, Ashley keeps it together. I actually feel bad for her again. Oh well, Ashley; there’s always Million Dollar Matchmaker.

And then there were 8. Now that you’ve finished talking to each other, we want you to talk some more. Ugh.

Grant & Lace – They find some bracelets that say ‘Grace’. How cute! Can we call them Gracelets, or is that one step too far down the rabbit hole? Then, they see this: 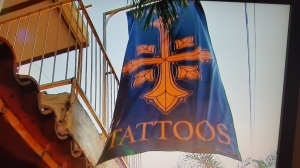 Yeah…maybe you should stick with the gracelets…

And yeah, that guy has a beer belly with a skull on it. Awesome. Grant dives in and gets Grace tattooed on his wrist, which has to hurt by the way. Then Lace as a wakeup moment similar to that first night in the hot tub with Chad, and wonders what the hell she’s doing in a tattoo parlor in Sayulita.

Grant – this is a TELEVISION show. It’s not real life. Have I not told you about the tattoo on my ring finger? Bartender? Atlantic City? Ring any bells? I don’t even remember his name, Grant!

But, she sucks it up, and now they’re marked for life. At least, when they eventually break up, they can both claim Grace is a religious thing or a life motto.

Nick & Jen – They paddle surf. They’re not very good. They talk about feelings. Jen wants Nick to open up. Nick wants to choose from 25 women. Watching these two talk is like watching paint dry. 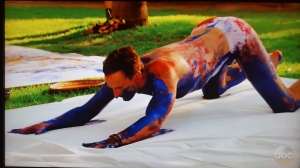 I don’t know where to go with any of that, other than Carly is right: they do get all the weird dates.

Fantasy Suites for All My Friends

Tonight’s the big night, when our young and hopeless romantics can retreat to the privacy of their own rooms, with no cameras, and discuss each other’s brains out.

Nick & Jen sit down for dinner, and Jen doesn’t know what Nick wants to do after the show is over. That’s easy. He wants to be the Bachelor. Has this guy sold any software in the past 12 months? Any at all? Nick mumbles until he runs out of things to say, then starts mauling Jen’s face.

Can we name our first son Kirk, though?

Grant & Lace recap their day. We got tattoos! I know! I love you! I love you, too!

Josh & Amanda do much the same.

Amanda: Today was the best!

Amanda: It was so fun!

Josh: It was the MOST fun!

Amanda: I have kids!

Amanda: I’m so glad I met you!

Josh: Everything in Andi’s book was TRUE!

Tonight: tears of joy, tears of heartache, and Neil Lane has his work cut out for him. See you then my friends.

And now, Bachelor charades, and there’s a twin! I miss the Twins already…