Last week, on The Bachelor! Taylor, Corinne! Corinne, Taylor! In the most epic 2-on-1 Date in Bachelor history!

Come on…I know The Bachelor is prone to hyperbole on occasion, but “most epic 2-on-1 in history”? May I present Chad vs Alex: 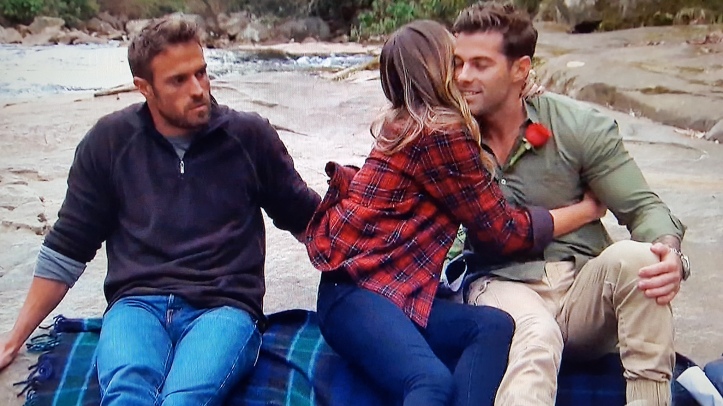 Two former Marines who had every reason to bond, and yet they smashed heads like pubescent bighorn sheep fighting over mating grounds, with only one moving on to Bachelor in Paradise. Or Olivia vs Emily:

The big-city weather girl battles the down-to-earth Vegas twin to see who is truly “here for the right reasons”, and again, only one reaches the ultimate goal of Bachelor in Paradise. Or Ashley I-lashes vs Kraysay: 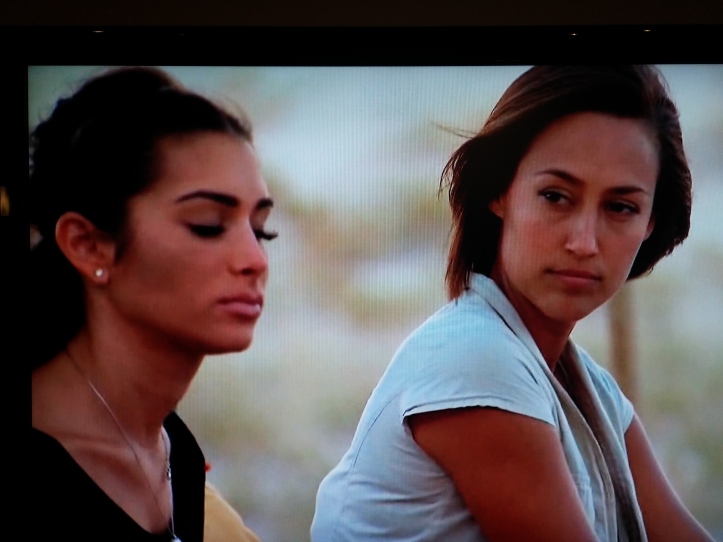 A fatally shallow narcissist goes up against a girl who is just plain fucking nuts, to see who can real-cry versus fake-cry more. And for the third time, only one ends up on Bachelor in Paradise. Or how about Nick’s entire season vs Shawn Gosling: 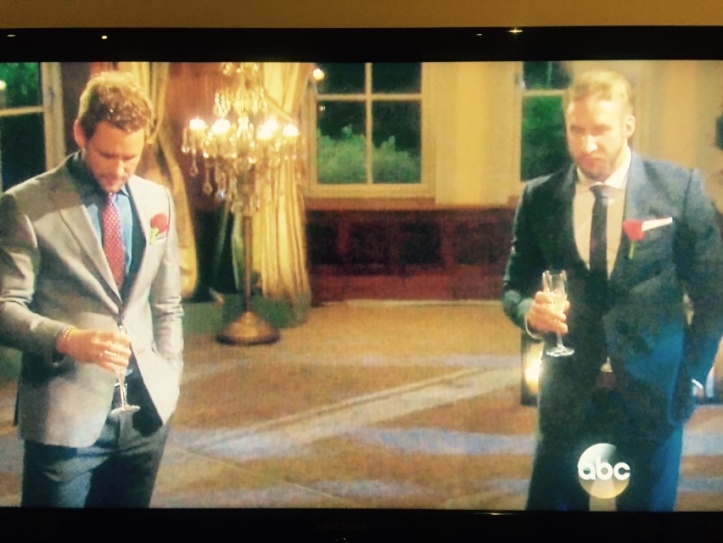 The War of the Look-alikes, with a mumbling John Lithgow pitted against a stoner Ryan Gosling, struggling to see if Kaitlyn could ever rectify one night of whisky-fueled bad judgment. And, not to beat a dead horse, but only one would punch their ticket for Bachelor in Paradise. Which, in retrospect, brings up two points:

1) Corinne and Taylor are rank amateurs compared to the people listed above, and their 2-on-1 doesn’t even appear on the historical Bachelor radar, and

Regardless, Taylor comes back to get the last word in, because she’s pretentious and annoying and smarter than everyone and she just has to prove it. “Relationships are about respect, and you’re being lied to, and you need to open your eyeballs (?), and emotional intelligence.” 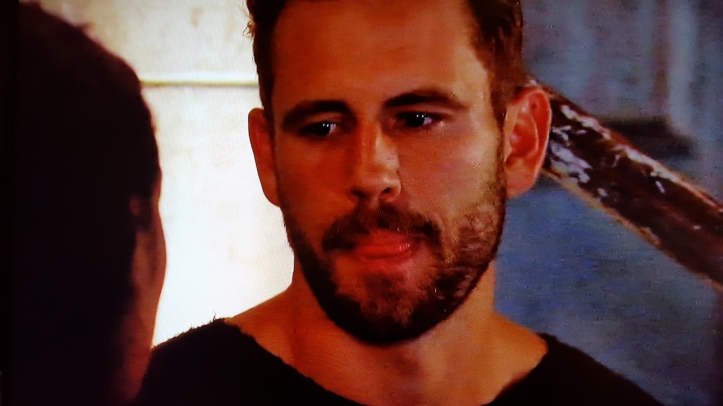 You know, I’m not actually picking Corinne in the end. I just want to bang her and she’s a lot less annoying than you…

Nick says “thanks for the advice, bye” and goes back to dinner, where he and Corinne drunk-maul each other at the table. Thanks for playing, Taylor; go find a coffee shop where you can lecture the barista about her underdeveloped sense of self.

The tensions are high tonight and the girls are bringing their A-games. Jaimi even pulls the balls out of her nose.

I feel naked without ’em…

The ladies are busily planning strategies for scratching and clawing for Nick Time, when Chris Harrison shows up, a grave expression on his face.

Hi ladies. So, I know everyone is excited to get some time with Nick tonight, but we’ve been trying to sober him up all day, and he’s still not in great shape. We’ve pumped 3 bags of saline into him, tried coffee, smelling salts – nothing’s really working, so  we’re skipping the cocktail party tonight and going straight into the Rose Ceremony. Honestly, we’ve tried everything, and me, the production staff – we just want to go home…

And that’s that. Nick comes out and mumbles some stuff, and out come the roses. Staying:

Vanessa – she’s so tuned out with this whole thing

Danielle L – “will your boobs accept this rose?”, “Yes and yes!”

Josie – who looks better tonight than she has the entire season

Jaimi – should’ve kept the balls in your nose

Alexis – this is what it sounds like…when dolphins cry…

Mmm, St. Thomas….after 126 straight days of rain in Marin County, this vacation looks pretty good right now. A hell of a lot better than Milwaukee, at least. Nick does a little hotel fly-by in a seaplane and meets the girls by the dock, looking snazzy in some very 80’s shorts.

Like my shorts? My therapist says that pastels bring out my happy side…

Kristina 1-on-1 – Fly Away to a Romantic Island Getaway

And by “Romantic Island Getaway” they mean “Share the Most Heartbreaking Story You’ve Ever Heard”. Nick and Kristina fly to a beach, and Kristina mentions her 8 siblings – 4 adopted and 4 natural kids of her adopted parents. Plus, she has a sister still in Russia. Sensing things about to get real, Nick interrupts Kristina to make-out in the water, because it’s a really nice day and he wants to get a little action in before she turns into Debbie Downer.

Later that night, the full story comes out. Kristina grew up so broke in Russia that she sometimes ate lipstick. Her mom sent her to an orphanage at 5 years old, because she broke the house rules by eating something. Spent the next 7 years in an orphanage, until she was given the option of being adopted by an American family. It was a hard decision, because on the one hand, Kristina would have to leave her family, friends, language, and culture behind. On the other hand, Russian girls who are kicked out of orphanages at 16 years old usually end up as prostitutes, so what to do… crazy story, and Lovely Better Half and I are now rooting for Kristina to be the next Bachelorette (funny how we never root for our favorites to marry Nick).

It makes you think, though. Can you imagine being in a situation so bad, that you would willingly leave everything you’ve ever known behind? To go somewhere where you don’t speak the language or know the people, bringing with you literally nothing but the hope of a better life than the one you had? And this place you’re going to, maybe you’ve never been there before, but you’ve heard of it. And in your mind it represents freedom and equality and the opportunity to pursue your dreams; a place where people are generous and kind and offer a welcoming hand to those less fortunate; a place where, as Kristina puts it, “You can live your life in color.” A country like that must be a truly special place, and I bet it would draw the best and the brightest the world has to offer. If you let it.

Yet, I digress. Nick is suitably humbled by Kristina’s story: 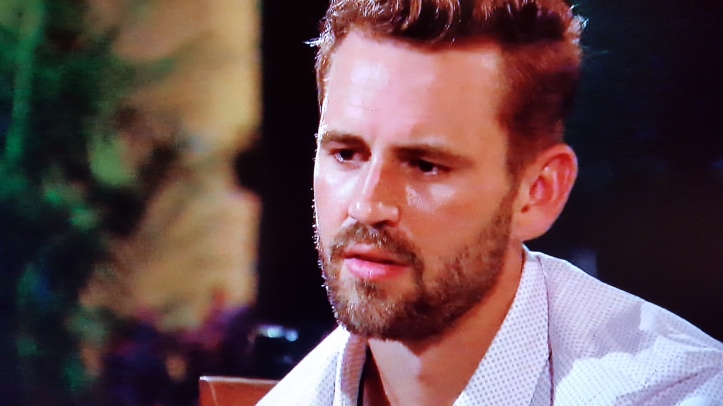 You’re WAY too good a person for me…

And a Rose and heart-touching maul for Kristina.

Raquel who! Seriously, Lorna, these fries are SOO much better than Raquel’s stupid salads…

Rachel, Raven, Vanessa, Corinne, Danielle M, and Jasmine – Let’s all play volleyball and cry! And seriously, what’s going on with these bikinis?

Raven: This ol’ thing? It’s just something I borrowed from my grandma, y’all…

Jesus, are there no mirrors on St. Thomas? This can’t be a legitimate look now days, can it? Anyway, the volleyball game devolves into a total shit-show. Corinne is wasted. Rachel doesn’t feel “valued” (yak…). Jasmine is an “unhappy turnip, because she’s turned all the way up” (Good one, Raven – poor choice in bikinis, but you’re queen of the one-liners tonight). Vanessa cries:

Why am I crying? I don’t even like this guy! Waahhhhhhh!!

What the hell happened? Did everyone take some bad acid? I didn’t think a date could be dumber than the haunted house, but The Bachelor just beat it’s own record for the second week in a row. Nick is very concerned about his future. Over a game of volleyball. No issues there. The only normal one is Raven. 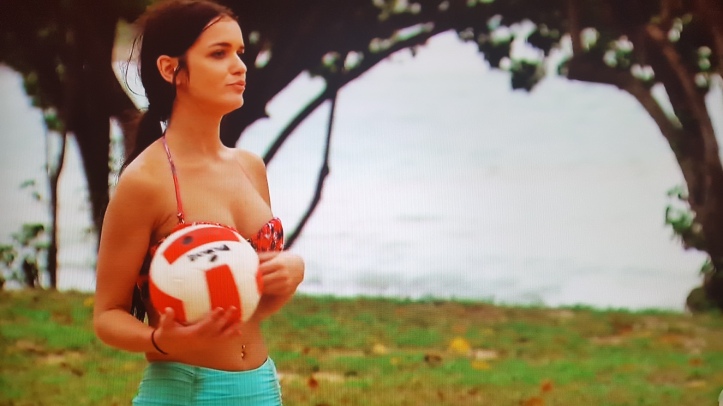 Y’all don’t wanna play anymore? Why is everyone so weird…?

It’s nighttime, and Nick wants to get everyone back in track. 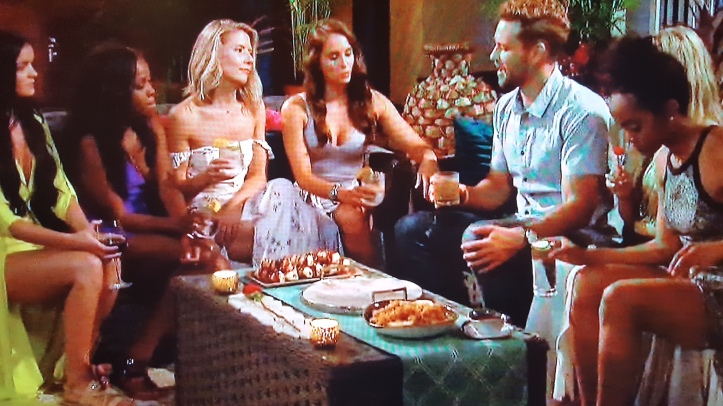 Everyone has a drink? A stiff one? Ok, let’s try this again…

Jasmine is ranting and raving like a madwoman. She doesn’t need to be here, she shouldn’t have to compete for attention, etc etc. Just as it’s done to so many contestants in the past, The Bachelor has officially broken Jasmine, and the other girls are sick of hearing her shit. 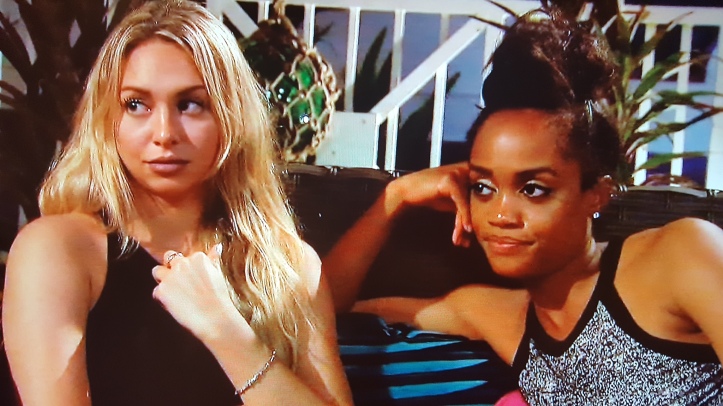 Corinne: Yeah, umm, over it.

Rachel: For the first time this season, I’m with you…

Jasmine complains to Nick about no 1-on-1 date, no Group Date Rose; she says she wants to choke him. And then she actually chokes him.

Jasmine: You like that? HUH? It’s SEXUAL, bitch! The CHOKEY! You wanna make out?! HUH?! Fucking make out with me!

Nick: No, actually, I kinda want you to go really far away from me right now…

Nick calmly explains that he’s not really “feeling” the whole chokey thing, while security circles just out of view, ready to pounce as soon as the cameras stop filming. And that’s all she wrote for Jasmine. Predictably, she cries: “He never gave me a chance. He doesn’t know what he wants.” I know what Nick doesn’t want – a future wife that might smother him in his sleep.

Apparently, the Group Date Rose goes to Raven, but we don’t see him hand it out. Maybe Nick just tossed it to her on his way to the medical tent to treat his neck contusions.

Wait – why did we agree to come on this show again?

Danielle L vs Whitney – Battle of the Jumpers

Whitney, Nick. Her name is Whitney.

Pilates instructor from Minnesota? Nope, not ringing any bells…

Our trio takes a helicopter to Botany Bay while Nick tries to remember who Whitney is. He never quite figures it out, but he does think she’s calming to be around. Kind of like a therapy dog. Danielle, on the other hand, has a fabulous set of breasts, and Nick stares at them for about 30 seconds and says, “Alright, I’m sending Wendy home. Winnie. Whatsername.”

As much as I like you, I feel like I can just adopt a terrier, and then still get to motorboat Danielle, so….

And that’s it. Danielle and Nick take the helicopter back to civilization while Whitney is left behind on the island, with nothing but a daybed to shelter her from the elements.

Well, it beats a swamp in Louisiana, I guess…

Time for dinner and Nick is drinking water for the first time this season. That can’t be a good sign. How about some light conversation? “What two words would you use to describe your ideal relationship?” Ok, then, maybe not…

Danielle: I would say ‘Love’ and ‘Trust’.

Alas, Danielle will never find out how Adventurously Raw Nick can be, because despite her confessions of love, Nick isn’t feeling it, so no Rose for Danielle. Which I believe is the first time both people have gone home on a 2-on-1. For such a momentous accomplishment, this sure was a boring date.

And Now, Nick Breaks Down

Wow, didn’t see this coming. Nick goes back to the hotel and he’s either drunk or feeling morose or both, because he unloads a truckload of emotional baggage on the few girls he didn’t send home this week.

And he walks out while The Producers call Nick’s mom to get the Intervention Protocol. But don’t worry ladies; there’s a backup, standing ready and available, and you’re gonna love him!

That’s all for this episode. See ya next week, my friends…

And now, Jasmine wants everyone to taste her dark chocolate.