Our Plan is Simple: If You’re Poor, Don’t Get Sick

Alright, this healthcare bill is terrible. All kinds of required services are pulled – mental health, disability services, anything having to do with being a woman. Seniors and anyone who’s had so much as a case of whooping cough in their life are going to see their premiums skyrocket. And oh yeah, some other “pre-existing conditions” that can raise your rates? C-sections, postpartum depression, domestic violence and rape. Is it just me, or do they seem to be targeting a particular gender with these cuts? Today’s GOP – let’s Make America Misogynist Again!

So yeah, the bill is garbage. But before everyone goes all freakballs crazy, let’s remember there’s a long way to go before Obamacare is actually repealed. No one knows the economic impact of the AHCA because it was railroaded through before the CBO could even look at it. They held the vote 17 hours after the text was made public; 90% of these clowns probably didn’t even read the thing. Check this out:

"I asked if he read the bill. He said he just came from baseball practice." pic.twitter.com/dZ4nLChZ7F

Yes, you heard that right: John Shimkus (R-IL 15th district) didn’t read the bill because he had baseball practice. “Sure, 24 million people might lose their insurance, but I can cover third like a human fuckin’ backstop!” And then there’s Jason Chaffetz (R-UT 3rd district), noted climate change AND vaccine skeptic (‘cos science is for nerds, yo!), showing up on his mobility scooter: 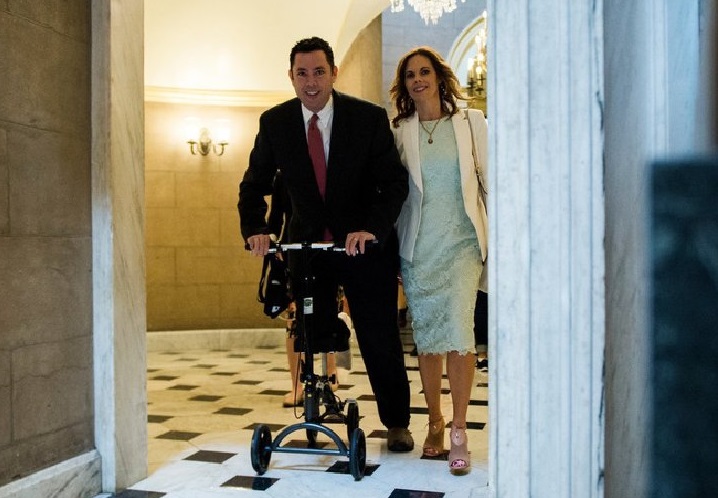 Hey, check it out! I just had elective surgery on my ankle, fully covered by my congressional health plan. Totally jacked up on Percocet, but still showed up in time to take away YOUR health care! That’s public service, baby! Amiright?!

They were rolling in cases of beer to celebrate after the vote, like it was a football game. Because nothing says “optically clueless” like throwing a party after raising insurance premiums on sexual assault victims. The House is playing in the kiddie pool; but now it goes to the adults in the Senate, and multiple senators have already publicly stated that the AHCA will be heavily revised before being sent back to the House. Basically, no one read this thing and there were zero consequences for voting for it, so they all said, “what the hell?” And yet, despite that, it still barely passed by 1 vote.

I’m not minimizing what happened, and people should be justifiably outraged. But, at the risk of sounding like an optimist for once, today was nothing more than political theater. A way to give Donny’s train wreck of a presidency some semblance of a win. In every realistic way, the Affordable Care Act is no closer to being repealed than it was yesterday.

On the other hand, I’ll tell you something the Republicans in the House did do today. Fifty-three percent of seniors voted for Trump, and their elected representatives just voted for a bill that increases their healthcare costs by 6x, at a minimum. That 6x is assuming they don’t have any pre-existing conditions, which only like EVERY SINGLE PERSON over the age of 60 has. It’s so bad, the AARP came out publicly against the AHCA. Now, old people are as diverse as any other group, from all walks of life and political leanings. But two things they pretty much all agree on: you don’t fuck with their social security and you don’t fuck with their health care. The Republicans just tossed one of their strongest constituencies under the bus for a bill that has little chance of surviving the Senate in it’s current form. That should play well in 2018.

So, congrats Republicans. You just tied an albatross around your neck, and midterm elections will be here before you know it. Enjoy those beers, boys; you’re gonna need ’em.