Remember when the bad guys on this show were fun to root against? Yeah, Lee’s not that. He’s just slimy and annoying and he needs to go away. But more on him later. For now, Welcome back, Bachelor Nation! And since it feel like 83 days since the last episode, here’s a quick reminder on where we left off: Rachel wants to get deeper and more intimate, Eric yells at Iggy, a snake? (it was in my notes, no clue), Eric and Lee fight, and “MY NAME IS IN YOUR MOUTH!”

All caught up? Great. Let’s rejoin the action, where Tickle Monster (aka Creepy Handsy Grabby Jonathon) is staked out on the front steps of Bachelor Mansion, waiting for Rachel and silently praying The Producers didn’t find out about his multiple restraining orders during the vetting process.

Jonathon: It’s nothing. Hey, have you checked out Lee’s twitter feed?

Luckily, before Jonathon can get too grabby, Bryan arrives like a fresh summer breeze, the night suddenly lush with dreams of moonlit beaches and tropical serenades. Rachel forgets where she is for a moment, and then tells Jonathon to bring her a mojito while she and Bryan chat.

Rachel: I really like you – like a lot – but you’re so charming, that it literally scares me.

Rachel: No. No spanish. We’re having a serious conversation right now.

Mauling ensues and Rachel is sprung over Bryan. SPRUNG. That guy needs to book his hometown date first thing tomorrow. But the big story tonight (and probably the next two nights) is Lee:

I’m not here to make peace with anybody…

Lee’s a prick. He called Will a dick in Week 1, he  fights with Eric last week, he interrupts Kenny twice this week. He pushes buttons, he lies, he’s condescending. It gets bad enough that Dean Franco, Brady the Nose-Picking Model, and Jack Stone! convene a meeting of the Einstein Trio to discuss the issue:

Brady: I think Lee’s an instigator, you guys.

Dean: Really? I thought it was just me thinking that!

Brady: Hold on, Jack Stone! I get that people will have personality quarks.

Dean: I think a quark is an anatomical thing?

Jack Stone!: Actually, a cork goes in a wine bottle…

And hey, we all know The Producers manipulate the footage. They pore through hours of film, edit it in ways to make some people look like villains, others like victims, and misdirect the audience to mask the ending. I get it. On the other hand, Dean – someone who presumably has had a few off-camera conversations with Lee by this point – drops this in the interview room:

Dean: The only people that I’ve seen Lee pick fights with have not been the people he’s used to seeing on a daily basis, from a cultural perspective.

Producer: What do you mean?

Dean: You know exactly what I mean when I say that….the longer Lee sticks around, the more everyone will become aware of his intolerance.

No creative license this time – those were Dean’s actual words. And if the 25 year-old Stoned-Dave-Franco-look-alike that doesn’t know the difference between a quirk, a quark, and a cork can figure this out, in real time, then it’s not a bad edit. This is who Lee is, and his appearance on this show is at best a failed background check, and at worst purely exploitative.

So, Lee and Kenny argue, and Rachel hears it, and she starts to crack. Because – surprise! – there’s some pressure when you’re the first black Bachelor/ette lead in franchise history. Remember all the online hate Kaitlyn got for sleeping with Nick? All the keyboard warriors that called her a ‘whore’ and sent her death threats? You think the social media world is a better place now than it was then? Yeah, Rachel’s reception has been extremely positive so far, but maybe there’s some stuff going on behind the scenes that hasn’t come to light yet. Whatever’s going on, Rachel’s had enough for one night, so Chris Harrison comes in for the assist. 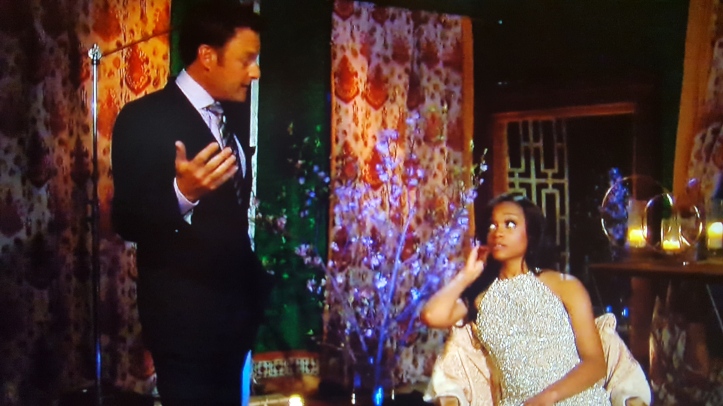 I can facilitate anything you want. I can even have someone ‘taken care of’, if you know what I mean. Seriously, have you seen Juan Pablo lately? There’s a reason you haven’t…

Thanks, Chris, but that won’t be necessary tonight. Just cancel the cocktail party and line up the boys; Rachel’s tired and she’s clocking out early.

Alex, Eric, and Anthony have roses.

Jonathon and His Uncontrollable Tickly Fingers

Adam – seriously, just swap him out with the doll. Rachel won’t even know, and The Producers will have one less mouth to feed

Iggy – Who’s turning into a drama queen himself. Lovely Better Half: “Iggy sweats like a piggy.”

Kenny – who’s about to be very unhappy

Bryce the Firefighter, Brady the Model, and Diggy the Dapper Gent

No comment on Diggy here. Just wanted to point out Alex’s purple leopard print suit. Not the greatest picture, I know, but his outfits just get stronger as the season goes on. By Week 7, he’ll be in Hammer pants and a man bun. Just kidding, he breaks out the man bun tonight.

Off to Hilton Head, South Carolina! Rachel arrives by boat, while The Producers subtly imply that the boys arrive by private plane. 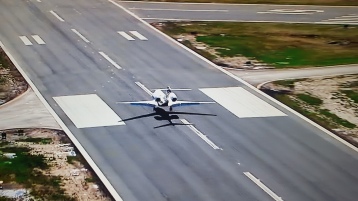 Stock footage of a Gulfstream followed by the guys walking out of United gate 62. Who do they think they’re fooling? Oh yeah – nice pants, Alex…

Our happy couple takes a jeep ride through Bluffton, SC, has an impromptu picnic, and talks about Dean being deathly afraid of heights. Really, Dean? Well, have we got a surprise for you!

You tell The Producers you’re scared of something, and they give it to you every single time. If I went on this show, I’d say my 3 biggest fears were margaritas, hot tubs, and threesomes.

Rachel and Dean take turns driving, and then sit in the one place in the entire blimp you do not want to sit if you’re scared of heights. 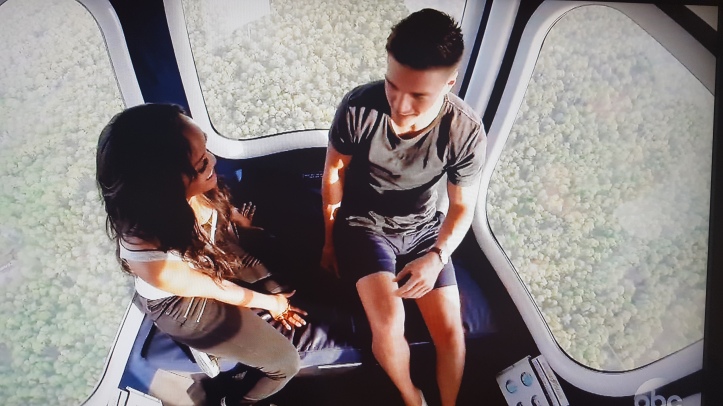 This doesn’t make me feel safer…

They buzz the hotel, and while the boys talk about Dean being too young and how he should be worried, Dean and Rachel maul each other’s faces like tomorrow will never come.

It’s nighttime in the Enchanted Forest of Lights… 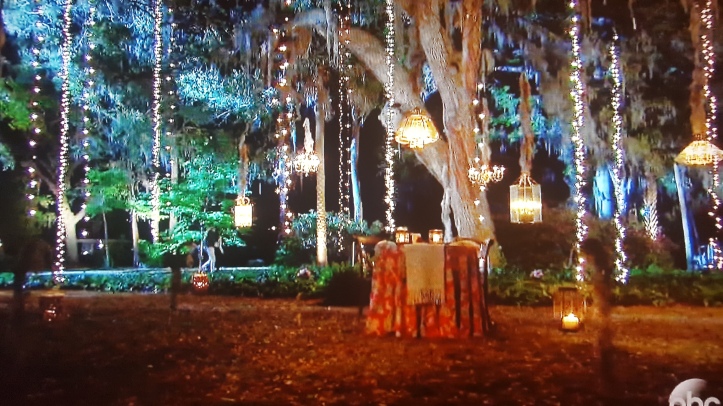 …and Dean and Rachel talk about their upbringing. Strict, religious, etc. Dean’s mom died of cancer when he was 15, which broke up his family, so he’s committed to making his own family a priority. Rachel thinks he is so hopeful, so positive, and so hot, so a Rose for Dean. But wait, there’s more! Rich Delbertson (Ricky Dunbarton? Delbert Rickson? Whoever..) sings a song written by some ABC executive’s niece, and Rachel and Dean dance amongst a sea of cell phones.

Literally no one is looking at the band…

Group Date – I Want to See Who’s Ready For Commitment

….Josiah. Which means Jack Stone! gets the 1-on-1 date. And Lee says something snarky. Whatever; no time to dwell on the scumbag, because we’re going on a booze cruise! And Kenny’s got a little captain in him! 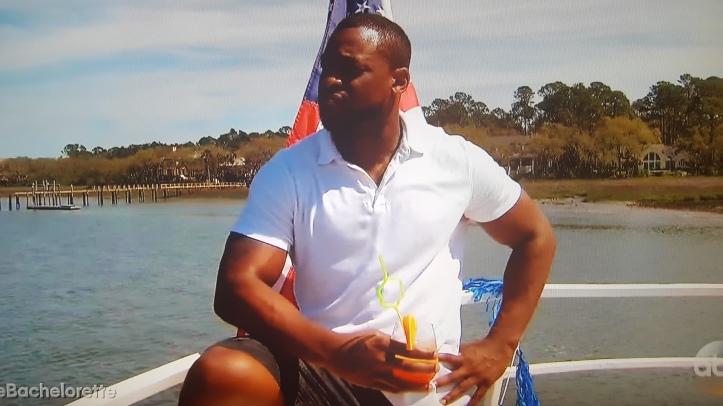 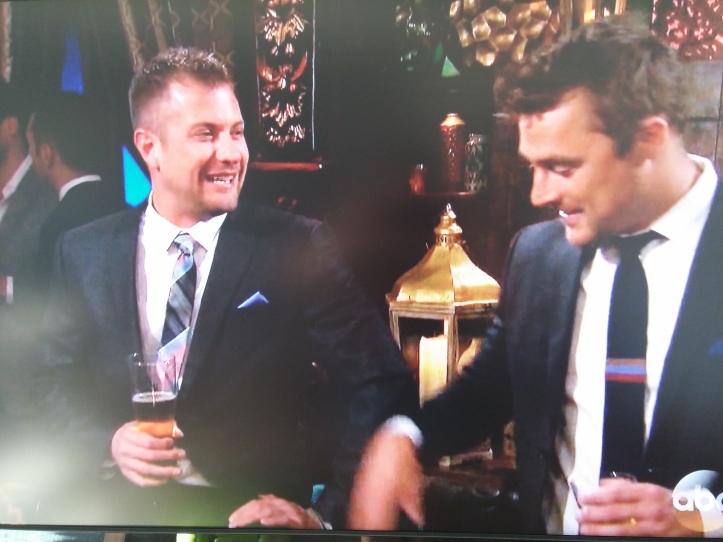 “I got a little captain in me!” Still my favorite of all time…

There’s a push up contest. Kenny raps. Peter…kinda doesn’t rap. Some dancing happens. And then, as is inevitably the case, the fun ends and the Embarrassment Portion of today’s date begins.

This should be good…

Away we go. Kenny gets knocked out on champagne, which is messed up considering that’s technically a french word. As is boudoir and boutonnière. Look at that; autocorrect even put a little accent on it. I’d file a formal protest, if it was me. Anyway, Josiah wins and he even gets a trophy.

Why is it ‘champions’, plural? Is it the height of irony when your spelling bee trophy has a spelling error?

It’s night time, and it’s the right time for a little drama. First off, Josiah with a funny: 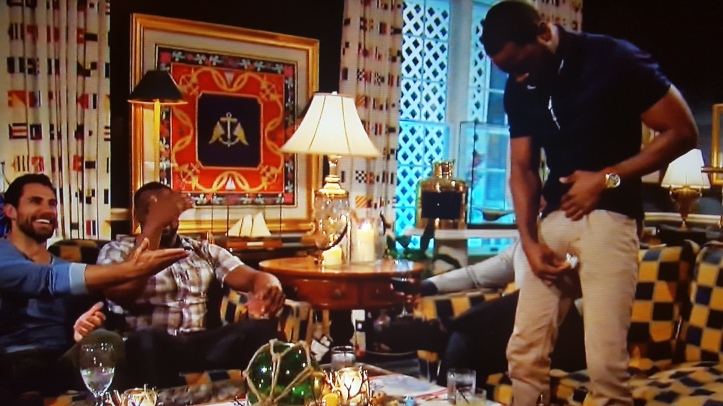 Did you spill a drink on your pants or are you just happy to see me?

Well, funny for everyone except Iggy, who’s approaching stalker levels of weird. He’s super confrontational and he keeps talking about being protective of Rachel, even when she doesn’t seem to need protecting. Like tonight, when he decides to throw Josiah under the bus, and sweats out a bunch of crap about him being a ‘pariah’ in the house.

Iggy: I want you to know that I’m very protective of you. I would never let anything happen to you. I wouldn’t let another man even LOOK at you. I know everything about you – your friends, your family, your daily schedule – just so I can know where you are at all times, and more importantly, who you’re talking to. Sometimes, I stand outside your window at night, and I stare inside. Just to make sure you’re ok. Keeping that in mind, I don’t think Josiah is right for you.

Iggy isn’t the only one acting slimy tonight. Lee is in rare form once again. 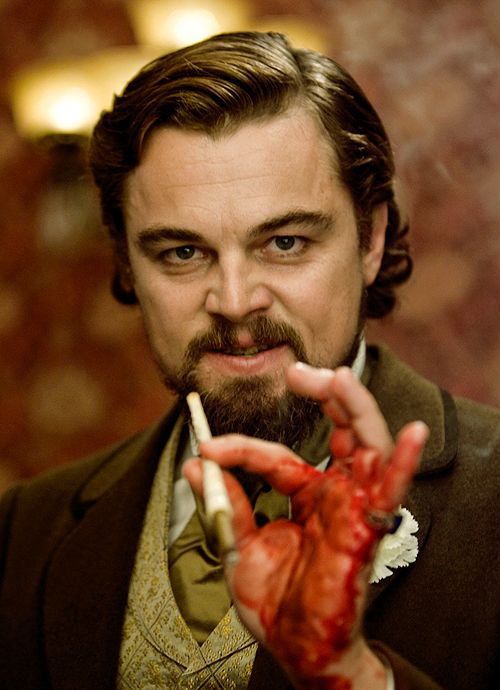 Oops, wrong picture again. Sorry, everyone. Here it is: 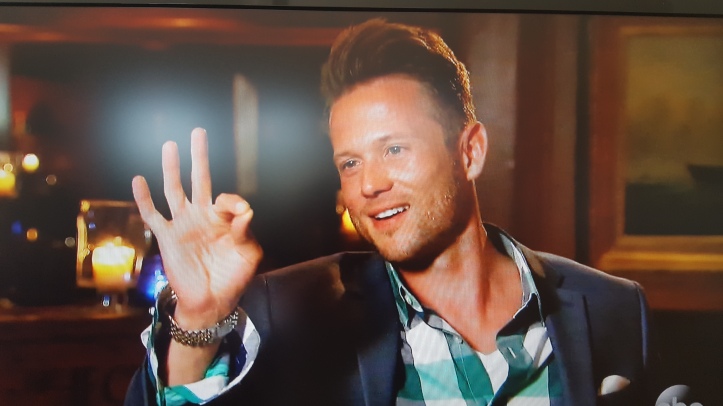 Kenny yelled at me yesterday! I do declare, the audacity of that man raising his voice in my presence! Well, I say, I simply must bring this to the attention of our dear Miss Rachel, and I will duly enjoy bringing his world a’crashin’ down!

So, while Kenny is stuck explaining himself to Rachel, Lee holds court at the bar, and his mouth is getting bigger with every whiskey on the rocks that comes his way. He calls Kenny a 220 pound ballerina (while Kenny’s not there, of course) and then tells Alex and Peter that of course he has no problem with either one of them.

So, Lee…why are we different from Eric and Kenny? Help us understand….

As always, Lovely Better Half puts it best: “I want to vomit on this guy.” Kenny returns, frustrated and ready to air some shit out. He taps Lee on the shoulder: 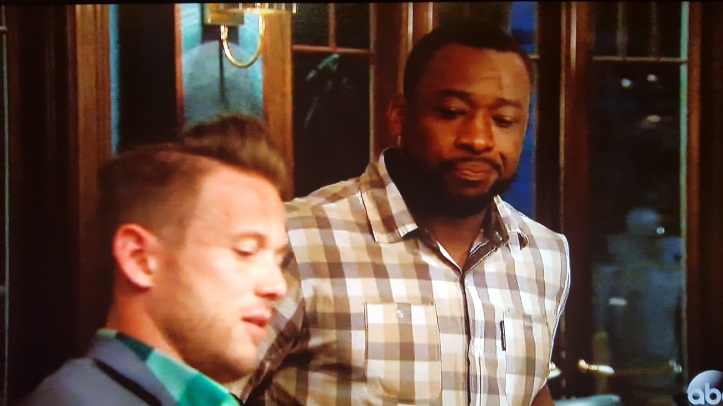 Hey bro – the ballerina wants a word with you. And he doesn’t look happy.

And it’s TO BE CONTINUED. Next week, on a dramatic two night Bachelorette Special Event: Kenny vs Lee in the most dramatic 2-on-1 date EVER! See ya then, my friends.

And now, Josiah wants Will to fill his goblet.