I’m not even kidding. The Producers must have revised their budget projections in the wrong direction, because Rachel is cutting guys left and right. It got so bad, Adam and Kenny actually bled real blood. But more on that later. Let’s pick up with last episode’s epic cliffhanger.

Last night: Kenny and Lee don’t like each other very much! Tonight: A Battle For Survival! Literally. Have you seen this location?

So, Kenny returns to Thunderdome by the Lake while Lee awaits with a cold drink and smug smile, looking generally arrogant and annoying.

Sorry, did it again. Here he is: 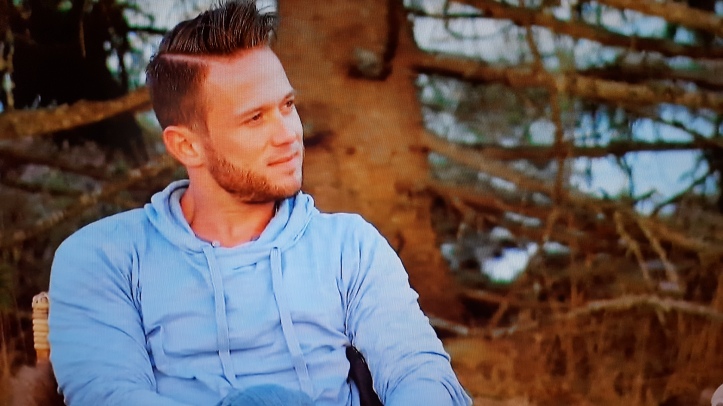 Have it out boys:

Kenny: You told Rachel I was violent?!

Lee: I never said that. [quizzical looks from myself and Lovely Better Half]

You get the gist. Rachel says she’s getting two different stories and it comes down to who she trusts more. And basically, Lee, you’re a dick, so ‘bye’. Yay – Kenny wins, right? Nope, Kenny doesn’t win. Because even though he’s flying away with the girl while Lee has to fight his way through the Norwegian wilderness with nothing but his cowboy boots and a hair full of gel, Kenny has to get the last word in. He just can’t let it go, leaving Rachel in the helicopter with the biggest ‘WTF?’ face in human history: 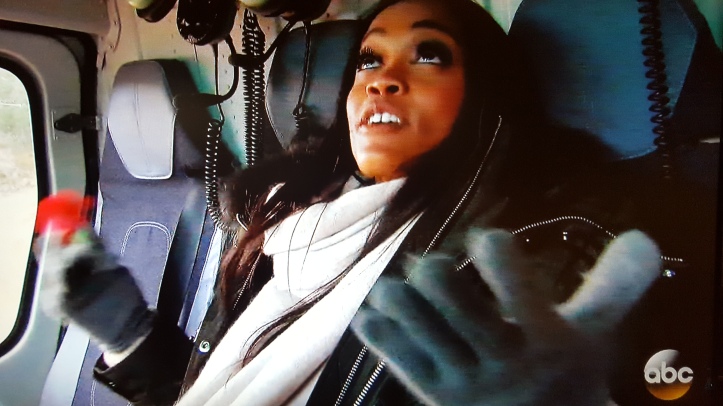 This is all of us right now, Rachel…

Ugh. such a bad move. Nevertheless, Rachel let’s Kenny back inside the helicopter, and it’s goodbye to Lee. Enjoy wrestling those Norwegian bears (fun fact: the Norwegian brown bear lives primarily off of berries but they have been known to eat the occasional sheep. So, no wool coats and Lee should safely make it back to civilization in time for Men Tell All). 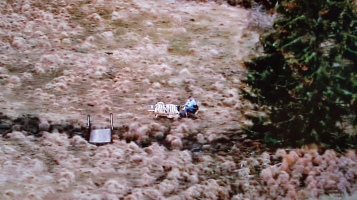 Seriously, how am I getting home?

Nighttime, and Rachel is worried about Kenny’s fuse. Kenny says he’s too honest sometimes, but everything he says will be measured with love – that’s a good line. Rose for Kenny. He calls his daughter and man, it’s getting a little misty in here. Sniff. Maybe I’ll check in on The Girl at daycare. Eh, she’s probably fine… 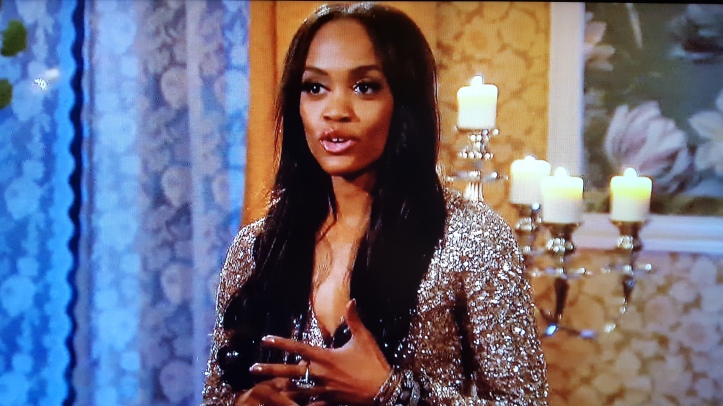 I can see my future in this room. And the reason I can see it is because I’m lit up like a human disco ball…

Bryan, Kenny, and Will are Rosed Up. Joining them:

Matt – Who? Does he even speak? I’m serious; tell me what his voice sounds like. You can’t do it, can you?

Goodbye to Josiah and Anthony, which is insane. Yeah, Josiah got a little weird last episode so that’s not too surprising, but I thought she was digging on Anthony. And Matt and Adam? These guys have said one sentence between them all season. Literally one. Matt gave the subject and Adam gave the predicate, and that was it. A lot of tape of these two must be hitting the cutting room floor, because so far, the doll’s had more airtime. Whatever.

Nobody in the house thought I was going home tonight. NO. BODY.

Well, there was one person who thought you were going home, and unfortunately for you, her opinion is the only one that counts.

Hello, Copenhagen! Wow, this place is nice – add it to the bucket list. Rachel  drops some Danish trivia about Hamlet and then drops a date card for Eric. I still can’t tell if this is really who Eric is, or if his whole funny guy routine is just an act. What better way to find out than on a canal tour, complete with drinks?

Eric: I want this many!

Rachel: Are you holding up all 10 fingers?

Eric: And all the toes on my right foot, too! The bigger, the better!

Rachel: PULL THE BOAT OVER!

And pull over they do, to go jump in some public hot tubs, presumably to decimate Eric’s sperm count before he turns Rachel into a baby-making machine. And is there anything more romantic than a public hot tub? 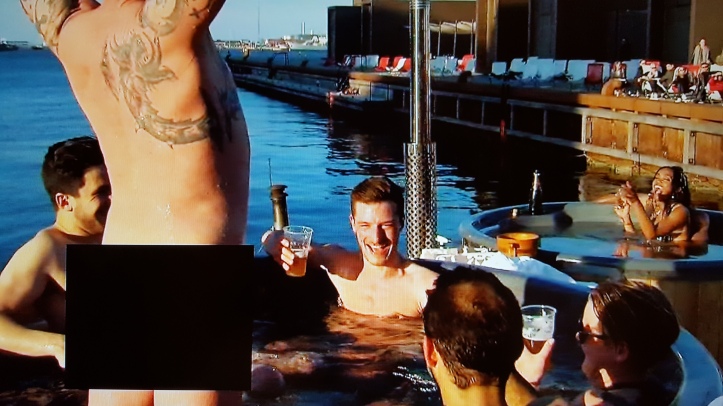 Why is Rachel laughing so hard? Those guys aren’t in a ‘cold tub’, are they?

Night time is the right time for more Danish trivia, and I find it hard to believe that this place is the 2nd most visited amusement park in the world. I’m sure it just barely lost to Disneyworld. Get ’em next year. Eric talks about his mom issues, and Lovely Better Half likes Eric now (“See? He’s just insecure around women, so he overcompensates to cover it up!” Alright, I’ll give him the benefit of the doubt). You know who else likes Eric? Rachel. 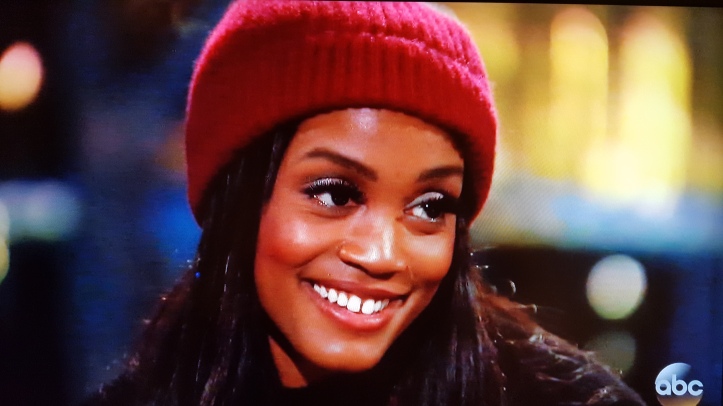 A Rose and a rollercoaster ride for Eric.

Lovely Better Half: They just ate.

Me: People are too nervous on the dates to eat, they never touch the food. I read that somewhere.

Me: I know, right? I’d eat the hell out of that burger.

That’s right, folks: real conversations from real suburbia. Want to know what life will be like after The Bachelor? Just go ahead and read it again. That’s as exciting as it gets.

Group Date – I’ve Taken a Viking to You Guys

Dean, Kenny, Bryan, Alex, Matt, Peter, and Adam. And shut the front door – they’re sailing on a viking ship! This is the best boat date ever. Though technically, if you never put the actual sail up, it’s not sailing; it’s just rowing, and it looks like a lot of hard work that I personally want no part of. Off to the Island of Viking War Games, where Tom and Morton promise to turn this motley band of Bachelors into fierce viking warriors!

Tom: I am whacking historian. I am expert in many whacking techniques. Old style of whacking. Scandinavian whacking. Traditional whacking clothes. Games from whacking time. Whacking with swords. Whacking in boats. And I will teach these guys to be whacking.

Morton: I am Morton. I know same.

And I know he’s saying ‘viking’, but it’s getting lost in the pronunciation and my mind can’t help but go there. Lovely Better Half thinks I’m a child right now, and she’s not wrong. The boys are fired up, particularly Alex, who loves dressing up and getting physical.

Note: that is not Alex’s viking costume. That’s his actual shirt he wore on the date.

Let the games begin. They pull on a greased stick, knock each other out of a circle with their ass, and there’s some one-legged hop-fighting. I got to be honest, this doesn’t look like fierce warrior stuff to me. Kenny vs Adam in a final wrestling match, and they both split their heads open, with Kenny claiming victory.

Night time and there’s a lot of making out. Rachel even mauls Adam, which is weird considering she’s never heard him speak.

Rachel asks Bryan if his family will accept her, which is interesting since this is the first time she’s asked a guy about that. Bryan’s looking like a strong favorite. Kenny however, isn’t looking too hot. He needs to be completely sure Rachel is into him and she can’t tell him that because she can’t tell anyone that, and Kenny basically talks himself out of a Rose. Rachel says he should be with his little girl, and sends him on his way. I give these guys a hard time, but any man that adores his daughter that much is alright in my book. Kenny made himself look pretty good this season; he’ll be just fine.

Anyway, Group Date Rose to Peter, and Bryan doesn’t even care. He literally kicks his feet up on the table and posts a selfie to his Instagram account (“shout-out from Copenhagen, yo!”). He knows he winning.

A short ferry ride to Helsingborg, where Rachel and Will eat pastries, throw sticks, talk to an old couple, and then gaze at the skyline in awkward silence while showing absolutely no affection towards each other at all. 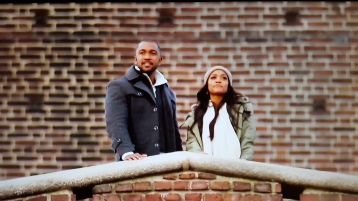 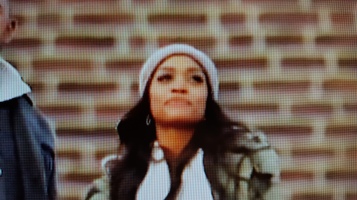 Dude, she’s waiting for you to make a move and you’re talking about ‘shipyards’…

Night falls in it’s dinner at the Carlsberg brewery. Fill me up! Denmark is awesome. Rachel isn’t feeling the love and tries to find out what Will is interested in.

Rachel: So, what kind of girls are mostly attracted to?

Then Rachel hits the secret transmitter in her purse and Will’s car pulls up outside the brewery.

Rachel: I feel like we’ve built a great friendship, and you seem like a passionate guy, you’re just not passionate for me. So, no Rose for you.

And that’s it for Will, no interview in the cab, nothing. I have a feeling he might find his way to Paradise, though. I hear there’s an opening…

Four guys gone already (not including Lee) and another cut coming up. Man, Rachel is channeling her inner viking tonight. Just slashing guys. Chris Harrison shows up for the first time at the 1:53 mark.

Sorry I wasn’t here for the past week, but I stipulated no cold-weather shoots in my contract, so don’t expect to see me in anything below 50 degrees. Now give me your coat, I’m cold…

Peter and Eric have Roses. Peter maybe as next Bachelor?

Matt – dafuq? Where has this guy been all season?

Adam – Ditto what I said about Matt

Which means it’s dosvidaniya to Alex, who is absolutely perfect for Paradise. I’d bet anything he shows up midseason, and causes all kinds of commotion with Kristina. They can run off and make tons of cute little Russian babies.

And then there were six. Wouldn’t it be completely random and crazy if Adam and Matt were the final 2? Now, that would truly be the most shocking Finale in Bachelorette History. Some previews of next week, they involve a lot of crying. See ya then, my friends.