Tonight, on an all new Bachelor! Arie can see a future with more than one woman! He tells a girl he wants to kiss her (so unusual for him)! Bibiana is broken! And Bekah sees a bra for the first time: 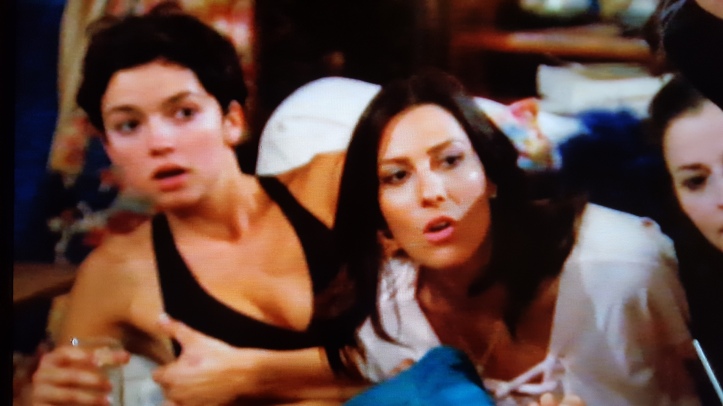 Whoa! What IS that thing? You wear it around HERE? But why…?

An all new Bachelor starts….RIGHT NOW! 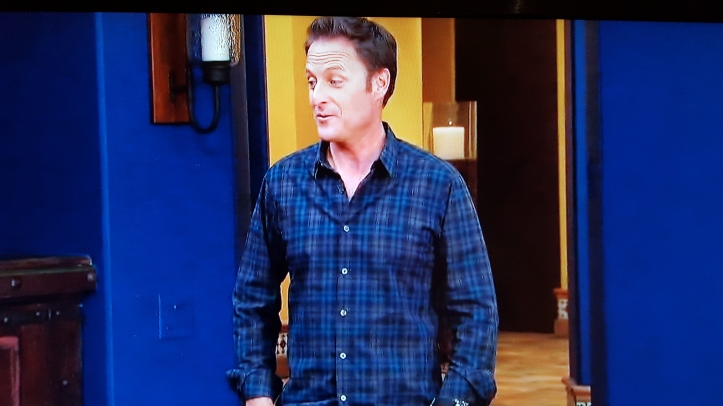 Hey, ladies. We have 3 dates this week – including two VERY fun group dates. And by VERY fun, I mean hell on earth for you, but everyone else is gonna pee themselves from laughing so hard. Seriously, right now they’re placing bets in the production room on who cries first. Bibiana, you’re our Secretariat. Anyways, here’s the Date Card. [stifling a giggle] Have fun!

Maquel, Jacqueline, Lauren B, Tia, Marikh, Bekah M, Bibiana, and Krystal. Welcome to GLOB – the Gorgeous Ladies of Bachelor Wrestling. And to help you get ready for your big debut tonight, say hello to two of the original GLOW girls, Ursula and… someone else who didn’t have anything going on right now. 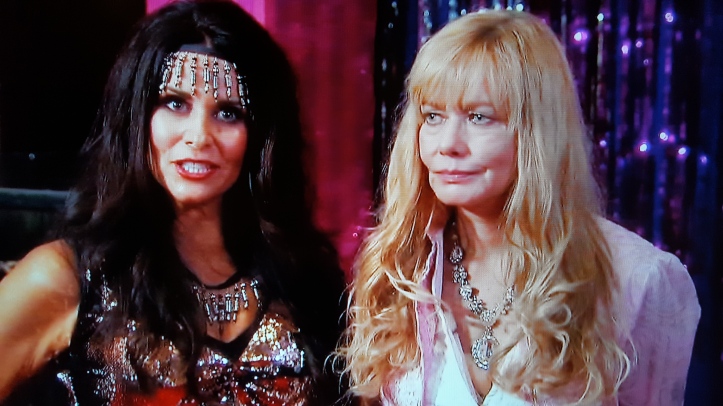 Either these two didn’t get along back in the day, or Ursula is seriously questioning her life choices…

Bekah M is like-totes-super-obsessed with GLOW! Apparently, she remembers watching it when she was negative 14 years old. Lauren B is fine with the wrestling part but is having trouble with the acting? Ok. And Bibiana and Tia are having problems with the whole thing because the GLOW ladies are, to put it mildly, a little intense. They’re yelling at everyone and talking shit about their moms, they shame Tia and Bibiana from the ring, and they’re just generally taking themselves WAY too seriously considering they haven’t seen the business end of a tv camera for 30+ years. If this is a very fun date, I can’t wait to see a crappy one. Eventually, girls assume their personas. 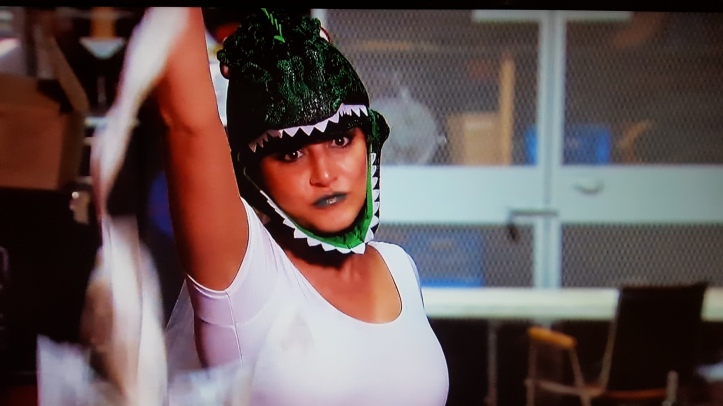 Bridezilla! For my next trick, I will require one small metropolis! Roar! 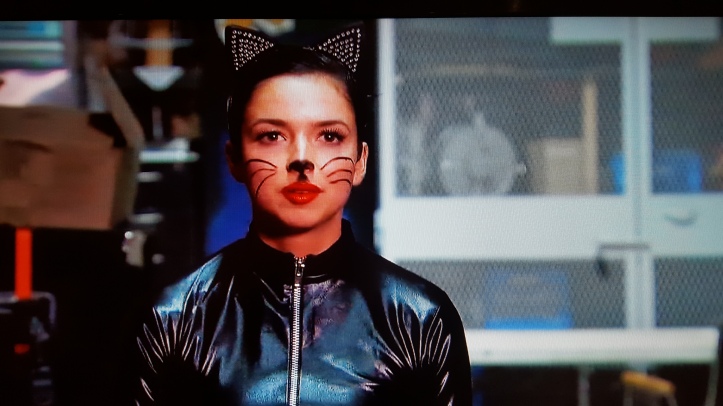 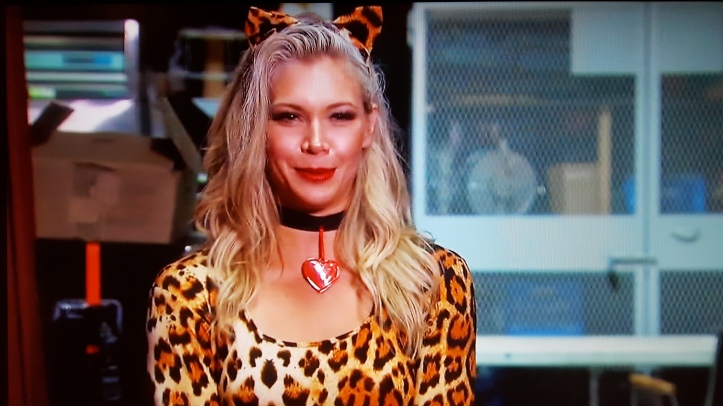 Crusty Cougar! Which is extra funny, because Sex ‘Kitten’ Bekah thinks 29 makes you a cougar.

The girls are ready to go, but we have one huge, extremely in-shape surprise for The Bachelor: Arie’s up first, and his opponent is Pretty Boy Pit Bull Kenny King from Rachel’s season! And Kenny immediately goes to work.

Who’s sixth string on The Bachelor depth chart? Because I think Kenny just killed Arie. BTW, You just know Robbie’s at home right now, fixing his hair and waiting for the phone to ring…

It’s nighttime, and we’re off to a trailer park. 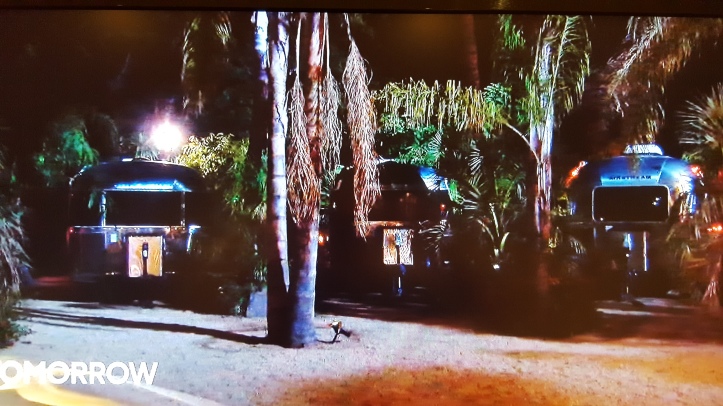 One of the girls: “Hey Tia! Do you feel like you’re in your element?”

Whoa. That was fucked up. Just casually throwing the trailer park joke out to the girl from Arkansas. Then again, Tia answers “YES!”, so if it doesn’t bother her, c’set la vie.

Krystral steals Arie away first. Why does Krystal always sound like she’s taken 3 too many valium? Her voice drives me nuts. They nosh each other’s faces for a while and then Krystal asks how she should approach Arie going forward. 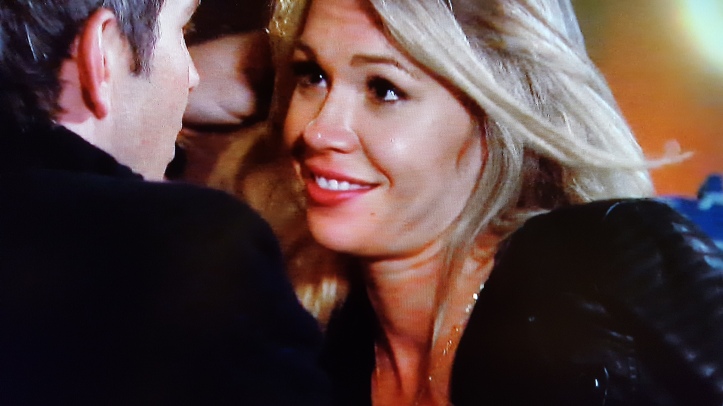 Krystal: Done! Can I be crazeballs, too?

Bibiana spends her entire time with Arie talking shit about Krystal, yet another indication that she’s never seen the show before. Let’s repeat it one more time for everyone watching at home: guys do NOT care about the drama in the house. Arie can’t even pretend to hide his indifference. 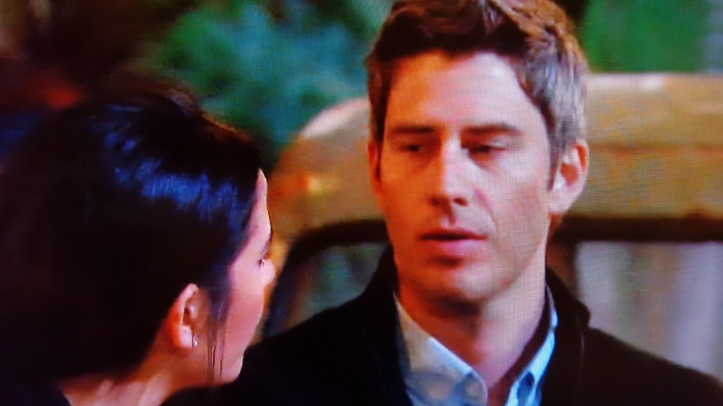 I mean, it’s hard, because I want Bibiana to feel comfortable, but at the same time I just don’t give a shit.

Arie brings Tia inside a trailer: 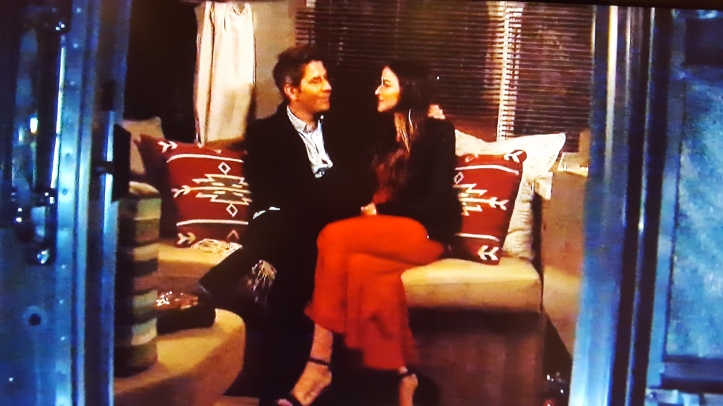 Because remember, he wants the girls to feel comfortable…

And it works: Tia says Arie makes her feel comfortable, and she’s always dated the wrong guys before. Yes, Tia, and that’s exactly why everything feels so comfortable now.

Bekah’s longest relationship was 2-3 years, but they ended up going in different directions – he went to one high school, she went to another across town. But the pain melts away when you meet someone new, and she hasn’t felt this kind of chemistry since homeroom. 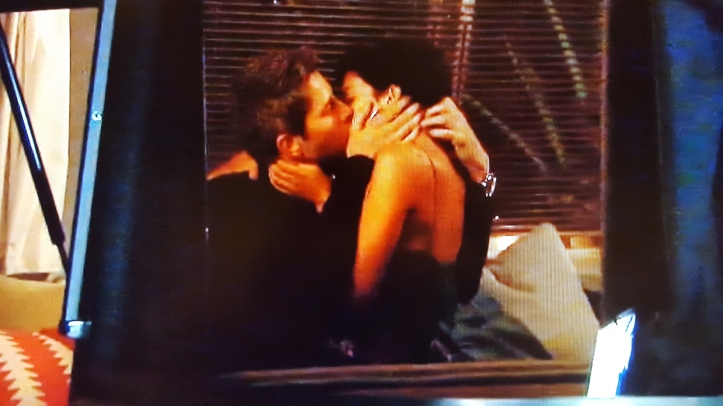 You want to go to prom?

Private plane to Napa, yo. 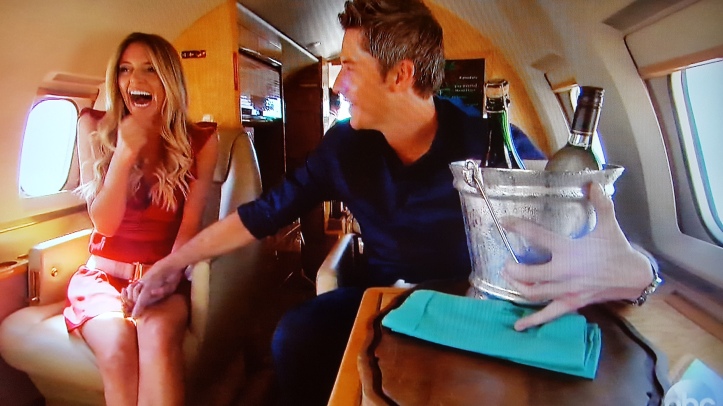 Lauren, I like you and all, but I LOVE my wine…

Welcome to Hall Winery, home of the neuroses-driven train wreck that was Lauren S’s date. She has her guard up, and she has trouble being romantic, so Lauren talks about her sleep schedule and getting old. Sexy. It gets even worse at night.

Arie: So, tell me how you came to come here. [Arie, you’re such a wordsmith…]

Lauren S: Well, I was in a very passionate relationship but I was also close to my family who has always been important to me especially since I got an eye infection because music is a big part of my life which is why I run away, and since there was zero romance in my last relationship it was very passionate… 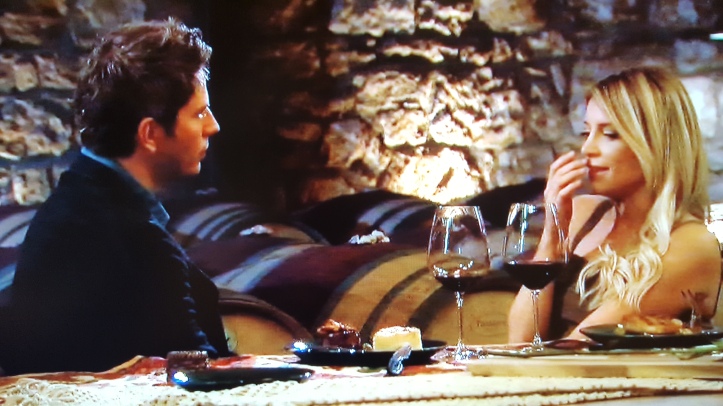 Omigod why can’t I stop talking, maybe if a cover my mouth no more words will come out…

But the words don’t stop, and I’ll give Arie this much: this guy has no problem letting his feelings show. He looks bored, which makes Lauren nervous-babble, which makes him more bored, which makes her nervous-babble more, and it just repeats until he’s basically signaling the production staff to start the car. So, no Rose for Lauren S, and Arie, being the sympathetic soul he is, gives her a hug and gently whispers in her ear: 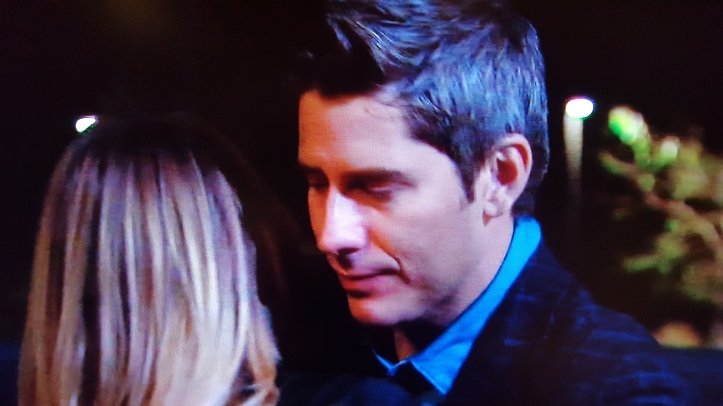 Actually, Arie’s probably flying back commercial too. Which will be awesome when they’re sitting next to each other on the flight back with 200 people wondering “does he pick her?” and Arie has to summon the energy to look interested for the hour flight back to LA due to contractual obligations.

Bekah: Which one was she?

Ashley, Becca K, Brittany, Jenna, Caroline, Chelsea, and Annaliese. We’re putting on a dog show, ladies! And who doesn’t like wagging tails and licking faces? After the sheer terror of the demolition derby, Annaliese, more than anyone, must be relieved that they’re playing with little bundles of furry love. 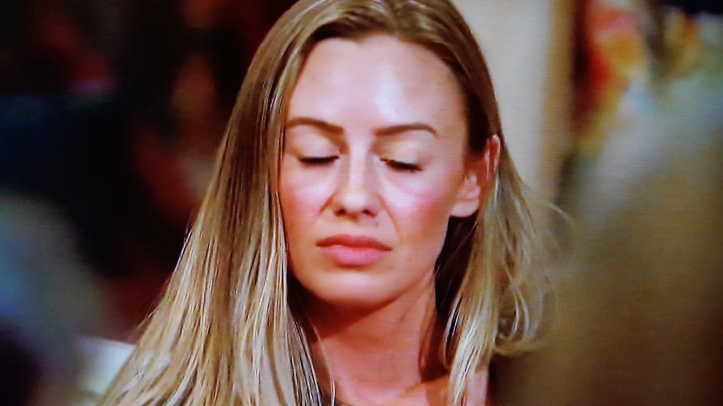 Nope, not kidding: Annaliese had a traumatic experience with dogs as a kid. She was sleeping at Grandma’s house, and little Puppy Sunshine bit her in the face…and she almost lost an eye? Hold on, that actually does sound traumatic. And then Bibiana throws karmic fuel on the fire by praying to Jesus that someone gets bit by a dog. First off, you’re actually praying to Jesus about that? Second, please, please, don’t let it be Annaliese; the poor girl’s been through enough already. Anyways, the guy from Best in Show is there, the dogs won’t listen, it’s a shitshow, and the audience looks like they regret taking the free tickets. This date sucked. And no, Annaliese wasn’t bitten. 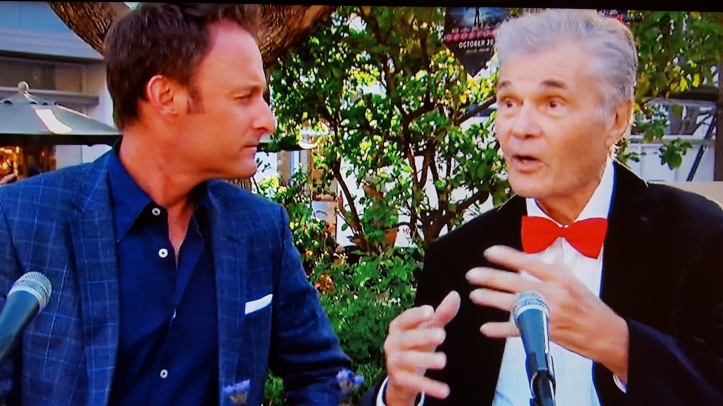 Hey Chris, when you said we’d have two VERY fun group dates, were you talking about this episode?

Nighttime at The Reserve, and Arie pulls Chelsea aside to tickle her shoulders.

Seriously – what is he doing with his fingers? Do guys actually do this shit?

Jenna tells Arie about her family, her life, her hopes, her dreams – tries to show him who she is as a person. Wait, no she doesn’t. 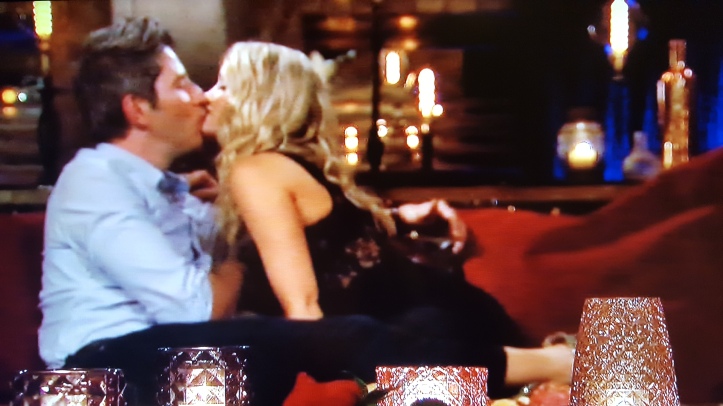 Jenna: Nom-nom-nom…can I have a Rose?

Becca and Arie talk, and everyone seems pretty deep into the cocktails at this point.

And what is Annaliese doing while everyone is slurping each other’s faces? Drowning herself in bourbon and getting inside her own head. Group Date Rose to Chelsea, because she’s close enough for Arie to hand it to her without falling over. 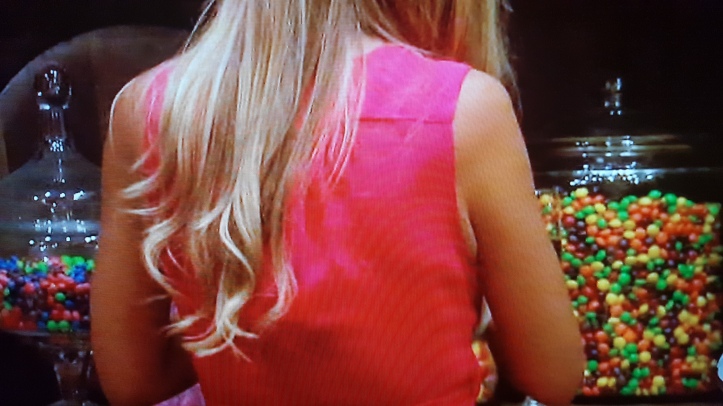 Hey, you know where I can find some M&Ms?

Bibiana wants to do something special for Arie, to really prove that she’s here for him. she puts together a daybed with candles and pillows, and a telescope so they can look at the stars together, without any distractions. 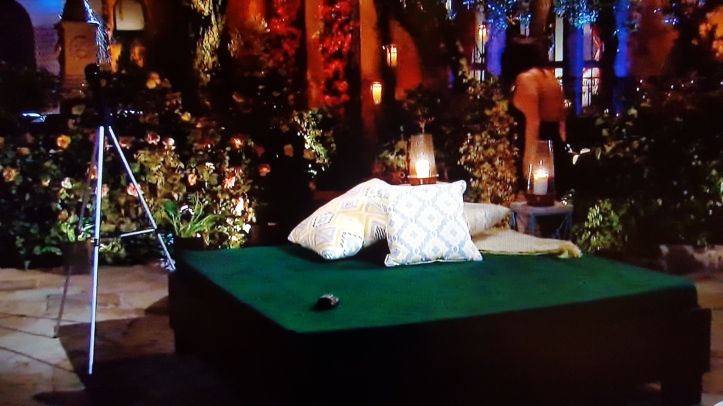 What a lovely gesture. I’m sure there’s no way this backfires at all…

Ten seconds later, as if on cue: 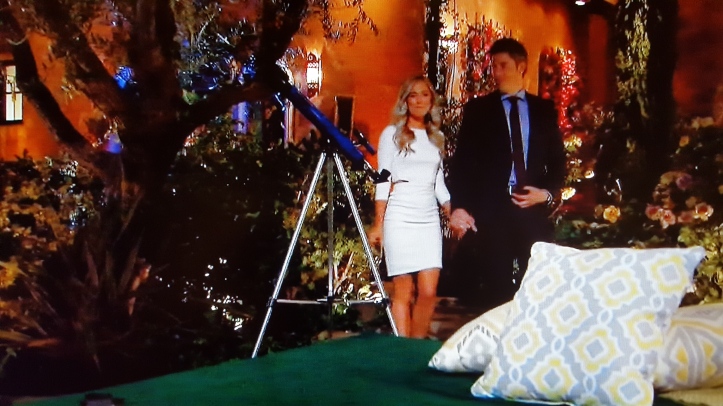 Hey, look what the interns set up! Wanna lay down and make out?

So Arie mauls Lauren B on Bibiana’s bed. And Chelsea. And Bekah. And Kendall. At one point, Bibiana comes out to say hi, and Arie tells her to come back in 5 minutes, which is just all kinds of messed up. 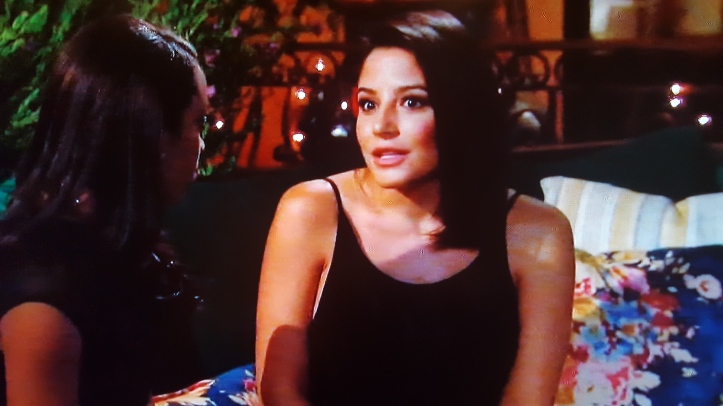 Not only did he tell me to go away, but he didn’t even give me my telescope back…

Arie asks Bekah if she wants to get married, which is the first time he’s asked that question. Seems important. She says she “doesn’t need him and that scares him because he’s used to people needing him more than he needs them”, and Arie’s mind is blown. He’s stammering and blushing and doesn’t know what to do with himself, and it seems weird to me that Arie is getting mindfucked by a teenager. Like, shouldn’t that be some kind of warning sign?

Tia gets hay bales and moonshine – what, is she not good enough for the Telescope Daybed of Love? They have stargazing in Arkansas too, you know.

But it’s Annaliese’s spectacular implosion that is the story of the night. After failing once to kiss Arie (“we’re just not there yet.” From a guy who’d make out with a telephone pole if it gave him an opening), she interrupts him while he’s talking to Caroline: “You’re very touch-feely, and it’s nice, but I just don’t like it when-” and in walks Annaliese. And I’m thinking, no no no, I want to hear Caroline out, because Arie’s doing some weird shit with his hands all the time and I can’t believe these girls think it’s normal. I guess Arie sees where things going, too, and runs off before Caroline can finish her thought. Annaliese gets 3 sentences into her pitch when Aries says “Yeah, not working for me” and sends her home. Hey, whatever faults he may have, wasting people’s time ain’t one of them; that dude is decisive. And I really hope Annaliese hasn’t had any traumatic childhood experiences with airport shuttles, because we’re about to hit the Trifecta of Terror.

(or is that Trifecta of Terrier? Too cheesy? Yeah, I should leave that one out.)

Let’s get right to it. Chelsea and Bekah have Roses. Joining them:

Caroline – I’d like to hear more about this touchy-feely-uncomfortable thing you were talking about, Caroline

Kendall – My notes say Arie gave her a dead animal tonight, but I can’t remember anything else about it. Did that happen?

Lauren B – she better keep her head on a swivel. Lauren’s are dropping like flies.

Becca K – she’s wondering why she didn’t get another $10k in gifts, I bet

Tia – here until the Arkansas jokes run out, then on to Paradise!

Maquel – she can talk, right?

Jenna – “I really want to get a rose.” Really?! Never heard that one before.

Which means it’s time to say goodbye to Bibiana, as well as Lauren S and Annaliese from earlier. Did Bibiana even get to use her own daybed tonight? That’s just not right…

Next week: Lake Tahoe, hot tubs, and mauling, SO much mauling. See you then, my friends. 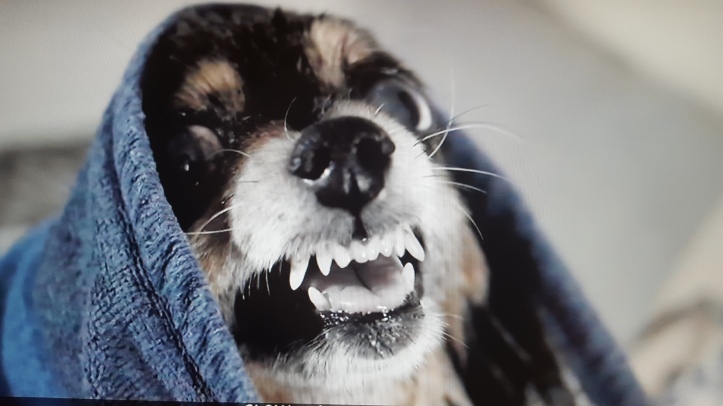