When we last left our wandering nomads of love, Ian had decided that he wanted to be the next Bachelor, and then set about doing everything possible to ensure that it would never happen. The Producers replay his speech for those of us with short-term memory loss, and Kaitlyn is understandably offended. “How can you say what you’re saying and not feel like you’re being rude right now?” Very simple, Kaitlyn: Ian is what we call “a dick”, and despite his claims to the contrary, he has absolutely zero self-awareness, and will never understand how much of “a dick” he really is. By the way, what does “surface-level” even mean? He’s just making shit up to make himself sound smart. I’m going to take a wild guess and say he got into Princeton on an athletic scholarship. Anyway, she basically tells him that she likes funny guys and he’s a toolbox, so he might as well go home, which he does, but not before gifting us with these parting gems:

“She’s not nearly as complex as I am.”

“Women don’t have trouble relating to me because I’m so deep.”

“I’m destined to be the Bachelor.”

“Did I mention Princeton yet? Princeton.”

“They would come out of the woodwork.”

“I’m good enough, I’m smart enough, and gosh darn it, people like me.”

And then Ian leaves without saying goodbye to any of the guys, because, you know, he’s better than all of them. Not because he’s scared that Ben Z is gonna knock him into next week for what he said to Kaitlyn and he just peed himself a little bit. Nope; it’s because he’s better than everyone. Anyway, everyone is very concerned about Kaitlyn, except for Josh the Welder, who’s relieved that Ian saved him from looking like the biggest idiot of the week.

Then again, maybe not…

And while the guys sit in a share circle and voice their concerns to each other, Nick takes a page from last season’s blowout between Andi and Mr. Super-Outdoorsy-Patagonia-Guy and runs off to comfort Kaitlyn (Of course, JJ makes sure Ian is “good” before he leaves, but that’s just how JJ rolls…). And Nick can be very comforting:

I love what we bring out in each other, Andi – I mean Kaitlyn. I want to know you and see your vulnerable side and show you my mother’s basement…

I think he slurs and mumbles too much. Lovely Better Half is more direct: “He’s so creepy and wormy. I want to vomit.” The interesting thing for me was when Nick mentioned that he talked to Ian the night before and told him, “when you talk to Kaitlyn about your concerns, I just hope you’re not accusatory.” Does anyone think Nick wasn’t pushing Ian to confront Kaitlyn about this to make her upset so he can swoop in to play the comforting boyfriend? Does anyone think he’s not slimy enough to plan that far ahead? I said it last season and I’ll say it again now: Nick is playing chess, everyone else is playing checkers. It’s working for him, because she starts mauling him like a bear cub, just in time for Shawn to walk in on them, and kick off Shawn Gosling’s Descent into Madness.

Me: That’s NOT Ryan Gosling…

Rose Ceremony at the Alamo

Insert “last stand” joke here. Wait, The Producers already did! And I noticed this from the pre-ceremony talk with Chris Harrison: 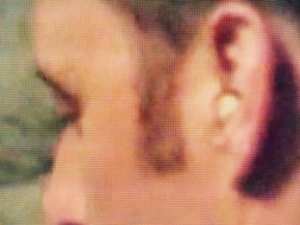 Is Harrison wearing an earpiece? You have 2-3 minutes of airtime per episode, and you need a producer to feed you your lines? My god, man; you publish one romance novel and you just start mailing it in. Let’s hand these things out before my bubble bursts anymore. Previously Rosed:

Shawn Gosling – current front-runner, but he’s starting to crack – and it’s about to get much, much worse

Let’s Journey On Together:

Jared – toss up between him and Ben H for the fourth hometown spot. REALLY young, though 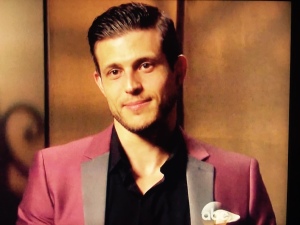 JJ – wasn’t douchey enough to keep his job on Wall Street, so he moved in with mom and dad. Plus, he showered with Clint. How is this guy still here?

Joe from Kentucky – I like him, but he’s just not on camera enough. Gone next round.

Ben Z – Definitely Final Four. Where is Godzilla’s hometown anyway? Doesn’t he live in the ocean? Does Kaitlyn have to sit down with Mothra and discuss her intentions?

Tanner – another nice, normal guy getting no airtime. Do you have to be either insane or a complete dick to get noticed on this show?

Justin – I got nothing

Josh the Welder – “I’m not pleased I’m leaving and Nick is still here.” And that’s why you’re going home – you made it about the other guy instead of Kaitlyn. Maybe these guys should watch a couple past seasons before they show up the first night.

Now, it’s off to Dublin, Ireland, where the guys give us a rousing rendition of “Helloooo Dublin!” while introducing the new line of Bachelor Hoodie-Wear:

Nick Date – Let’s Walk Around a Park and Have Sex

To make a long story short…yeah, that’s pretty much what happens. They walk around, blissfully holding hands, until they come across a vicious herd of pigeons and Kaitlyn completely freaks out. Is it weird that I find her fear of birds endearing? They do a little “impromptu” river dancing:

Hey Andi! See how spontaneous and fun I am? See how I don’t have to be serious all the time? See how I can stop thinking and JUST LET THINGS GO?! ARE YOU WATCHING, ANDI?!

Methinks he’s trying a BIT too hard to revamp his image. After dancing, Nick buys them rings to wear on their wedding fingers…umm…again, maybe trying a bit too hard. They maul each other on a bridge. They maul in an alley. They maul next to a store having a 20%-off sale. They maul in a pub. Then, to mix it up a little, they meet later that night and maul each other in church, just in case God wasn’t paying attention in the park, the alley and the pub. Nick rehashes sweet-nothings from Andi’s season:

It’s such a magical feeling with you, Andi – I mean, Kaitlyn. It’s everything I thought it would be. I love looking at you and kissing you. I’m feeling for you. You’re even more beautiful than the pictures in mother’s basement. I want to know every part of you.

Kaitlyn’s eating it up with a spoon, and invites him back to her hotel room, where they dance around the issue until it’s abundantly clear the cameras aren’t packing up anytime soon; then they close the doors on the production staff for a night of wild and naked adult fun. Just remember, Kaitlyn: if you’re going to make love to Nick, you better love Nick. Bad things happen if you don’t love Nick.

And hey, no judgment from me. Consenting adults can do what they want, and trust me, I’m the LAST guy to wag my finger at two single people hooking up. Plus, Kaitlyn said on the 1on1on1 date with Farmer Chris and Jimmy Kimmel last season that you have to “try out the goods”, so you can’t accuse her of being a hypocrite. For what it’s worth, I agree with her. Intimacy is a big part of a relationship and it’s important to see if the physical chemistry is there. And I don’t particularly subscribe to the thinly-veiled double-standard that exists between male and female contestants, both on this show and in the game of life. ON the other hand…Nick has a well-documented history of kissing and telling, and Kaitlyn has to know that the other guys are going to be supremely pissed off when he tells them. And he will tell them, because he’s manipulative and slimy and he likes to push buttons. So, more power to you, Kaitlyn, for doing your thing. But when it all goes sideways, you dug your own grave by trusting Nick to be discrete.

Additionally, I think we need to take a moment to revisit exactly who Kaitlyn decided to sleep with first, and who she risks losing, and their celebrity look-a-likes (just for fun): 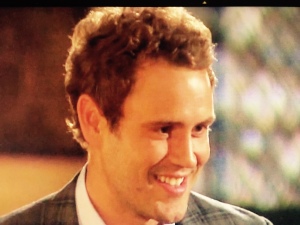 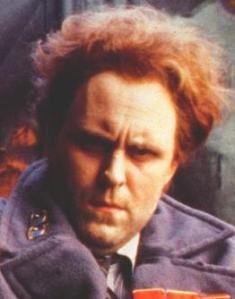 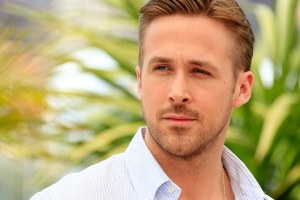 I’m just saying, whiskey makes you do some stupid things. The next morning, Kaitlyn wakes up feeling fabulous about the night before:

She looks pretty happy, huh? Nick returns with a triumphant grin on his face, and tells a couple guys that he spent some time alone with Kaitlyn, which is pretty restrained and classy for Nick. I have to admit I’m pleasantly surprised. Of course, when Justin mentions that Shawn Gosling spent some time alone with Kaitlyn as well, Nick’s expression changes, and the manipulative prick we all know and love comes out to play:

Oh, really? Shawn spent time with Kaitlyn? MY Kaitlyn? well, maybe my story changes a little bit then, huh? What do you think of that?

And change his story he  does: “Yeah, so, we just hung out and she invited me back to her place. I was, like, shocked, but she really wanted me to come to her room. We had some more whiskey [laughing] – we had a LOT of whiskey yesterday – and then, you know, one thing led to another, and it was very…[looking directly at Shawn Gosling] intimate. It was very personal and authentic. It felt comfortable.”

Tanner, Ben Z, Shawn, Jared, Ben H, and Chris all meet at a funeral home to have an Irish wake for Kaitlyn. She lays in a coffin, giggling (which is weird) while the guys write eulogies about her. Tanner writes a pretty clever poem (this guy needs to get in the mix more often – he’s funny), Chris the Cute and Sweet Little Dentist serenades her teeth, Ben H talks about her being plucked to death by pigeons (?), Shawn says he’s sorry about her taking her own life after spending the day with Nick (uh-oh, getting jealous), and Ben Z has everyone clear out because it’s bringing up memories of his mom passing, and it’s here that I start to think that he’s the next Bachelor. Look closely, Ian; THIS is the guy that girls come out of the woodwork for.

Eventually, everyone meets at the Guinness brewery to get lit up and watch Shawn Gosling finally crack. Kaitlyn does the nightly maul-o-rama, and when she gives the group date rose to Jared, Shawn loses it. I don’t get why this sets him off, but LBH is sympathetic: “I’d lose it, too. Do you know what I would do if I was Kaitlyn? I’d give the rose to Jared, but I’d give Ryan Gosling a secret message, like grab his thigh. Really high up. Oh, Ryan…” While Jared and Kaitlyn are watching a private concert by the Cranberries (REALLY? This is the first real band that’s been on this show. How did The Producers pull this off?), Shawn Gosling pulls aside his favorite intern to vent his frustrations. Boiling it down, Kaitlyn told him he was the one, but he can’t handle sitting around for the next 2 weeks, watching her (in his words) “bang other dudes.” He looks pretty finished with the whole process. Cut to a preview of Kaitlyn from next week… 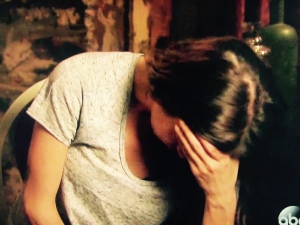 …and that’s what loving Nick gets you, folks! It’s all sunshine and unicorns with Mr. Creepy!

And now, Brony (Bricky? Brilly? Broomy?) meets Britt’s mom. Have they not gotten their own pilot yet?